Let history record that on this day, Vojislav Šešelj went on a diet.
Posted by Eric Gordy at 19:07 1 comment: Links to this post

This just in from a friend of East Ethnia, Gish Jen's experience at the Belgrade Book fair:

I have seen crowds before, but I was taken aback by the Belgrade book fair, where some 15,000 people attended my opening address. A few days later, too, at the airport lost and found, I watched an officious frown break suddenly into a smile. "You're a writer!" the woman behind the counter exclaimed and, as others watched enviously, produced my bag. The power of writing! During the fair, a reporter asked whether writers in the United States were like writers in Eastern Europe and, when I said I didn't know, volunteered, "Here, writers are gods." Well, that's a difference, I said...

The rest hides behind a registration screen at TNR, the patient are welcome to sample on.
Posted by Eric Gordy at 22:46 No comments: Links to this post

Now that the unindicted Donald Rumsfeld is being replaced the just barely unindicted Robert Gates, the next head to roll is that of John Bolton, who has been impersonating an ambassador to the United Nations.

Update: Did I say unindicted? Too soon.
Posted by Eric Gordy at 17:42 No comments: Links to this post

When there is trouble in the village, count on Josip Broz to help.
Posted by Eric Gordy at 16:51 No comments: Links to this post 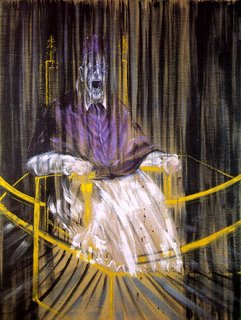 Who knew that the first head to roll after the midterm elections would be one from a Francis Bacon painting?

(Image courtesy of WebMuseum)
Posted by Eric Gordy at 20:22 No comments: Links to this post

A good day for democracy

I would have to be a lot taller to get proper historic perspective, but let's hope that this administration is the bizarre aberration it appears to be, one horrifying detour from this society's path to democracy, an aggressive and ultimately failed effort at restoration by a residual clique of hardliners on its way out.
Posted by Eric Gordy at 14:13 5 comments: Links to this post

Nikolic outlined the other day just on how he envisages his "Greater Serbia" to be in an interview (see also here) with the good old Kurir. In response to Agim Ceku's visit to Montenegro he argued that Serbia should impose sanctions (and visas...). When asked about how this would be for Serbs in Montenegro, he noted that they would come to Serbia, just like Serbs from Croatia and Kosovo...

Gavin Simpson and Sameer Padania have a question:

GV Eastern Europe editor Veronica Khokhlova has pointed to debates about video footage of atrocities in the past. However, in the realm of Balkan blogs, many of which are cross-linked on sites like East Ethnia, there seems to be something of a dearth of examples of vlogging or other home-grown initiatives dedicated to reconciliation.

How might video be used in this or other situations? As training or education materials? As evidence? To promote reconciliation? What role can citizen journalism play?

I know there are a lot of people reading who are a lot more involved in the media and exchange scene than I am. What do you think? Video za pomirenje? Any interesting projects out there that you know of?

Chronicle of a death sentence foretold

I am guessing that I may not be the only person who is underwhelmed by the verdict against Saddam Hussein, which was timed to be announced just before the midterm elections in the United States.

Not to confuse the matter: he is undoubtedly guilty, not only of the crimes with which he was charged, but of a lot else as well. But the character of the process and the conditions under which it was carried out leave a lot to be desired. And the sentence of death by hanging calls up both bizarre images of ritual sadism and a despotic tradition of offing the people who occupied power previously – both images which do more to revive the character of Saddam Hussein’s rule than to point toward any sort of vision of a democratic or just future. This kind of a punishment is the act of an insecure regime.

One way of thinking about transitional justice is as a performance: a new regime demonstrates its capacity, in contrast with its predecessor, to apply the rule of law and settle the controversies surrounding its arrival to power in the process. By providing a fair trial, they embody the distinction between an old despotism which exercised summary justice and a new legal state which does not fear its opponents’ evidence and arguments. By providing a public trial, they create the opportunity for a forum on the legacy of the past in the process which Mark Osiel calls “making public memory, publicly.” To the degree that they (in the words of Nuremberg prosecutor Robert Jackson) “stay the hand of vengeance,” they demonstrate their commitment to be constrained by legal rules.

The Saddam Hussein trial failed on all these points. The charges were selective, standing in the way of producing a comprehensive account of the character and actions of the old regime (not all of which would have reflected well on the occupying power or the current paragovernment). The court and government manifestly failed to control the proceedings, maintaining neither the loyalty nor the security even of the officers of the court. The fear of what might come out in the course of the proceedings was such that the trial was broadcast – but with a twenty minute delay, to allow for the editing out of inconvenient moments.

As for the rule of law, there is no such thing in Iraq to be represented in a trial, a fact of which the occupying powers who are obligated by international law to maintain public services and public order are no doubt aware, regardless of what their representatives say to the press.

There are probably not many people in the world more deserving of severe punishment than Saddam Hussein. It is only in the context of a misbegotten fiasco like the occupation of Iraq that his conviction on charges of which he is guilty could be made to appear like another desperate and empty act of revenge.
Posted by Eric Gordy at 13:56 1 comment: Links to this post