East Ethnia's friend from Yakima notes in the comments to an earlier post that the sentence given to the people who were convicted of setting fire to the mosque in Niš was a "slap on the wrist." Thanks to AR, let's have a look at what their wrists got three months for. 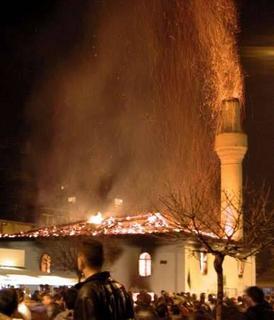 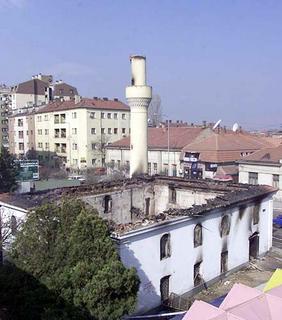 2. The mosque after the attack. 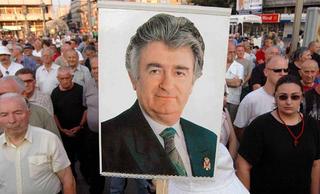 3. Support for the arsonists from the Hair Club for Men.
Posted by Eric Gordy at 06:15 No comments:

Disappointed with the real world?

Try 20 things that only happen in movies. Observant people will notice that in fact, there are 40.
Posted by Eric Gordy at 06:14 No comments:

So the young men who were convicted of setting fire to the mosque in Niš have been sentenced. Five months for one of them, three months for seven of them. Just to show how impressed he was at the severity of the sentence, one of the convicted arsonists, Dušan Mančić, responded by declaring, "Death to Muslims." Majesty of the law, nego šta.
Posted by Eric Gordy at 19:00 1 comment:

Dark, but neither spontaneous nor vulgar. Like a truffle.

That is the sort of humor that science predicts you will find on this blog. People who prefer prankster-type humor will have to try another blog.


You like things edgy, subtle, and smart. I guess that means you're probably an intellectual, but don't take that to mean you're pretentious. You realize 'dumb' can be witty--after all isn't that the Simpsons' philosophy?--but rudeness for its own sake, 'gross-out' humor and most other things found in a fraternity leave you totally flat.

I guess you just have a more cerebral approach than most. You have the perfect mindset for a joke writer or staff writer. Your sense of humor takes the most effort to appreciate, but it's also the best, in my opinion.


Also, you probably loved the Office. If you don't know what I'm
talking about, check it out here: http://www.bbc.co.uk/comedy/theoffice/.

My test tracked 3 variables How you compared to other people your age and gender:

Since you didn't ask about Harry Potter

But yes, Azra read the new book and so did I. It may be a sign of the diminishing isolation of the Balkans that the first copies were available in Belgrade (at the Akademac bookstore) at midnight on the same day they were available everywhere else, apparently for the first time. In any case, it is a bit of a poor benefit, as the books are expensive and a translation is not promised until September.

Some of the local commentary on the book had to do with the approach to identity in the fictional wizards' world -- national-chauvinist insistence on "purity of blood" is definitely looked down upon, and the view of multicultural pleasure as drawn by the amused fascination with non-wizard conveniences seems a little bit trivial and market-based (however, the slinky French stereotype that is set up at the beginning of the story is demolished at the end -- something there about emotion?). The approach to authority in the stories remains conditional: teachers and ministers are to be respected if their motivations are in order. The American and European commentators who see the books as a "liberal" story may be right on that point, and the image of a harried but professional officialdom struck a nice contrast for some Balkan commentators. The only figures in the book interested in power for profit or its own sake do get interests on their side, but are thwarted (in one passage, Dumbledore says, by "love," but that may be beside the point).

There is an interesting reflection by Mika LaVaque-Manty over at Left2Right looking at the Harry Potter universe as one of disenchanted modernity, with all the obligatory references to Weber and Kant. It is followed by an equally interesting discussion at their comments site. Most of it turns on the interpretations of morality in the books and whether the stories can be taken as any kind of serious moralno štivo.

For me, I've discussed it a bit with my daughter. We have both read the whole thing but not yet made it through the joint reading aloud. I appreciate that the morality business is not too heavyhanded (check Oscar Wilde's heavily laden childrens' stories for a comparison). On the other hand, our discussion of the whole "love" business has been limited to a categorisation of the varieties in the book of what is described in Ms Rowling's fine British parlance as "snogging."
Posted by Eric Gordy at 12:39 No comments:

Serbia's special prosecutor for war crimes now has a web page presenting their work. For now it has some basic legal documents, the indictments they have issued (in relation to the Ovčara case), contact information and some news. Under "predmeti" it looks like it will be possible to follow the progress of cases. The "stručni radovi" section has legal interpretations by the prosecutorial staff on a variety of topics (in HTML, and also downloadable as PDF). Currently the site is only in Cyrillic, but they promise an English version and a Roman script version by September.
Posted by Eric Gordy at 12:01 No comments:

Just arrived in steamy Boston. I'll try to put something up on what I learned in the course of my travels as soon as I figure out what that was. In any case, posting will be uneven from me until mid-August or so, as we are off on a long automotive journey across the mysterious space that knowledgeable people assure me exists between the American coasts.
Posted by Eric Gordy at 21:23 1 comment: