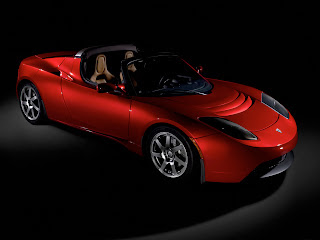 Okay, so you probably already know about the super-inexpensive car manufactured by Tata Motors. It is marginally less likely that you have heard of the ultraslick all-electric, no-emission sportmobile manufactured by Tesla Motors.
Posted by Eric Gordy at 16:25 8 comments:

Based on their survey of voter preferences, CeSid is predicting that SRS candidate Tomislav Nikolić will have a slight edge in the first round of voting for the Serbian presidency, but that the shift of voters from the other candidates would mean reelection for DS candidate Boris Tadić in the second round.

Another interesting finding from the survey is that a large number of voters from the smaller parties are not intending to support their party's candidates: 73% of LDP voters say they will vote for Tadić instead of Čedomir Jovanović, 43%of DSS-NS voters prefer Tadić over their candidate Velimir Ilić, while some proportion of SPS voters and 2% of DSS voters say they will vote for Nikolić.

Increasingly (as Nikolić himself predicted), there are two political blocs in Serbia: one represented most strongly by DS, and the other represented most strongly by SRS. There are two main consequences of smaller parties putting forward candidates with no hope of winning in the first round: 1) to make SRS appear to be more popular than it really is, and 2) to give Koštunica power as a broker that is out of proportion with the support that his party enjoys and inconsistent with the preferences of most of his party's members. But there is another dimension here as well: DS also relies on the support of other parties because it cannot turn out its own supporters. While 74% of SRS voters say they will vote for Nikolić, only 60% of DS voters say they will vote for Tadić.
Posted by Eric Gordy at 11:48 2 comments:

Novi Sad mayor Maja Gojković has made at least the first step to breaking from and competing with the Serbian Radical Party. She has founded a "citizens group" called "for our Novi Sad." Presumably the plan is to allow her to continue to put herself up as a candidate for mayor without having to be the candidate of the party which still considers her a member (whether she agrees or not). Should her group develop into a political party, it might not have much potential to draw support outside of Novi Sad, but this would be enough to weaken the position of SRS in Vojvodina generally.

PS: According to Edo Maajka, this means that she is no longer among the only ones who have held to their principles. But he means that in a bad way.

PPS: The article linked above has now been updated -- Ms Gojković denies the report. Does this mean that Edo Maajka can continue to kobajagi respect her?

PPPS: Interestingly, it seems that the Novi Sad SRS organisation continues to believe that Ms Gojković is a member, while SRS (acting) leader Tomislav Nikolić thinks otherwise.
Posted by Eric Gordy at 10:20 1 comment:

And another bureaucratic saga comes to an end (we hope). BT has come through with the internet service, credit where credit is due. And have offered me eight months free broadband as a token of something or another.

In related bureaucratic news, the Home Office has now publicly declared its intention not to pursue students who overstay their visas with an eye toward deportation. This bothers me not much at all -- let a thousand students bloom -- but there is something interesting about the explanation offered by the director of the BIA (which is neither the Bureau of Indian Affairs nor the Bezbednosno-informativna agencija, but the Borders and Immigration Agency). She says she wants immiration officers to use "common sense" and remain "focussed on those people that are causing harm." Now, how is that supposed to make a boy feel? Or is it, in the words of an immigration officers' union functionary, a matter that "Home Office priorities depend on what the media are paying attention to at any particular time."?
Posted by Eric Gordy at 18:48 4 comments: