For the sake of completeness, here is the most hate-filled of all of Thursday's speeches, by the film director Emir Kusturica. Thanks to Andras for the video:

Much like another figure associated with literary history and pointless wars, he seems to have a thing about rodents.
Posted by Eric Gordy at 16:21 8 comments:

Why nobody writes to the general

Anyone who has ever had a child of theirs serving in the Canadian military might well shudder to see this: the speaker in this clip was a general in that army. He wants to appear to be a friend of people he is calling savages underneath his breath, who probably do not recognise his implicit claim that it is unreasonable to expect such people to control themselves. At one time this person was responsible for the lives and safety of a small group of young people and a very large group of civilians. Worse still, he was responsible for assuring compliance with international humanitarian law.

With friends like these there is really no need for enemies.
Posted by Eric Gordy at 12:22 22 comments:

Blic reports that according "an unnamed source close to the investigation," police believe that they may have identified the person who died in the violence that followed the calls to violence by high-ranking officials on Thursday night. They have run a name, but considering that the person has a family, I will not until the conclusion is certain. The speculation is attached to an article suggesting that the absence of police to control the violence was deliberate.

Update: It now seems more or less certain that the victim was Zoran Vujović, a 21-year old student resident in Novi Sad.
Posted by Eric Gordy at 00:23 10 comments:

I have new footage of the speech by Mr Koštunica yesterday.

Today in the world of malicious idiots

Next month it will have been five years since Zoran Đinđić was murdered. Some people may or may not be aware of this, as indicated by the fact that they are still murdering him.
Posted by Eric Gordy at 18:42 1 comment:

All that the medical examiners know about the person who was burned to death in the attack on the US embassy yesterday is that it was a male between 17 and 22 years old. It is also known that there was no reason for anybody to be killed, but that is not a finding of the medical examiners.
Posted by Eric Gordy at 16:03 No comments:

Thanks to Milena for the video.
Posted by Eric Gordy at 11:09 No comments:

Unsurprisingly, the reborn Hadži-Politika has found comfort in returning to its role as official hagiographer. Their Friday edition features headlines on "Serbia's answer" and people who "Came to follow the call of their heart." Glas gadosti has an entry for this year's award for the most vulgar leading story. Novosti is acting like Politika used to act, hiding the news at the end of the story.
Posted by Eric Gordy at 09:31 No comments:

Discussion at the Serbian cabinet

The daily paper Blic has carried a transcript of an exchange among Serbian government ministers on the behaviour of hooligans after the declaration of independence of Kosovo. They do not give a date, so I am not certain whether this is from after Sunday night rather than after last night (the number of injured police would suggest last night, however). My translation.

Velimir Ilić (minister for infastructure): They have caused us much greater damage than broken windows. Those people at B92 and other media had better be careful how they talk about those young people.

Snežana Marković (minister for youth and sport): You are the last person who should tell people how to behave. Everyone knows what you have been advocating.

Ilić: Madam, you have been in sports for two months, and I have been for twenty years. Be careful, the sportspeople will come to you.

Dragan Šutanovac (minister of defence): What sportspeople, what are you talking about? I will stand in front of those wimps if somebody has to. Now, why was the police instructed to allow the hooligans to go wild on the one hand, and on the other hand to protect public order? That just endangers the police.

Ilić: You cannot call them hooligans just because they broke some windows and injured a few police officers.

Vojislav Koštunica (prime minister): Those people, hooligans as you call them, were just reacting to the violation of international law.

Šutanovac: Oh please, if they had not been organised they would not have known what to do. What defence of international law are you talking about?

My fear was that perhaps a decision had been made to allow a public outrage that would provide a pretext for declaring a state of emergency. But clearly the government is not united, which I suppose could have been guessed beforehand.
Posted by Eric Gordy at 09:00 5 comments:

Thanks to Andras for the video.

Update: There is somebody who feels affirmed by Koštunica, gle čudo.
Posted by Eric Gordy at 01:28 1 comment:

Another night of vandalism and violence

The countermeeting at Ušće was once again a tremendous success. Maybe I got the time and place wrong there. On the other hand, maybe I did not.

Update: Now that the flags in front of the US, Canadian, Croatian and Turkish embassies have been burned, please send any books you would like burned to Nekažnjeni huligani, c/o Vojislav Koštunica.

Update2: Police appear to have protected the embassies of Bulgaria, Italy and the UK, as well as the studios of Radio B92 (B92 has added one of those scrolling text update strips, and on the radio Tatomir Toroman is doing some very fine reporting). On Kneza Miloša where three embassies were attacked, they waited until the attacks were carried out and then sprayed everyone with tear gas. Which goes just great with open flame, in case you were wondering.

Update4: The spokesperson of the urgent medical center notes that most of the injured people coming their way are also heavily intoxicated with alcohol. Could an event like this following the large DSS-SRS promotional meeting be coincidental? Anybody recall the DSS-SRS discussions of a state of emergency?

Update5: I will be out for the evening, but I can bet that my friends will be on the job with reports and possibly video.
Posted by Eric Gordy at 18:03 3 comments:

Check it out -- a day off work, closed schools, free buses, and a state-sponsored meeting to be addressed by superstar democrats like Grobar and Koštunjavi. Remind you of anything?
Posted by Eric Gordy at 10:30 No comments:

So the proposal is that if I want to become a citizen of the country where I am living, I should be required to prove my worth to it. And would the UK care to prove its worth to me?
Posted by Eric Gordy at 13:06 5 comments:

Quote of the decade

"There is not a bit of difference between the statements by Koštunica and Tadić yesterday and the policy of SPS in the nineties"
--Ivica Dačić, president of SPS
Posted by Eric Gordy at 06:37 4 comments:

How to persuade the people in Kosovo that they really want a future with Serbia: break windows at one embassy, set fires at another, and sing folksongs that touch the heart like "Ubi, zakolji, da Šiptar ne postoji" (translation: "kill, slaughter, so the [insulting name for] Albanian will not exist). Ama baš ste neodoljivi.

Update: Viktor and Bganon suspect that the mildness of the police may not simply be a consequence of their čokolino-based diet.
Posted by Eric Gordy at 22:34 4 comments: 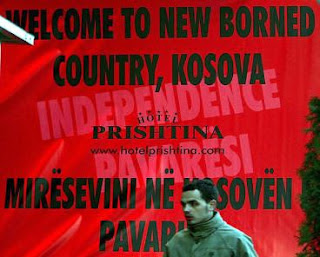 Not many people will have been surprised by Kosovo's declaration of independence today. Whatever futile and symbolic measures may be taken to appear as though it is being prevented, there has not been a chance since 1999 that there would be any other outcome (a few drunken ultrarightists on the street or press statements by tiny Bosnian groups will not change anything either). Some people will undoubtedly be celebrating the event, but it will take serious and committed work to assure that the new situation means something more than jobs for a new crowd of politicians. I am neither thrilled nor outraged, but rather think that what matters most is how the problems that have been left from the past and the new ones that are going to be generated are going to be addressed. Kosovo and Serbia are both now states, and each one has the opportunity now to show that it has the capacity to behave like a responsible one.

What the Kosovo government has to do is demonstrate its commitment to inclusion and the rule of law, assure freedom of movement and full legal protection for everybody living in the state, and build friendly and functional relationships with all of the states in the region. An independent state has obligations that are greater than the obligations of Unmikistan, which could always be transferred elsewhere.

The Serbian government has to begin to take seriously the desires of the Serb residents of Kosovo, not just to posture in their name. That means engaging with the new state as equals to build a regime of cooperation and protection. The need to make gestures of rejection is a need related to publicity, and it should be indulged for a while. But behind the scenes, somebody had better be generating ways to protect the interests of citizens.

For the last eighteen years, one state or parastate more or less in the Balkans has been par for the course. One that means something good for the people who live in and around it, that would be something.

Note: I know that at least some of you who read this will want to disagree with me vehemently in the comments (you are welcome to agree too, of course). Price of commenting -- give me advice on how to fix the comments visibility problem!
Posted by Eric Gordy at 16:58 16 comments: