It is not necessary to have any sympathy for Saddam Hussein -- who was a revolting thug -- to see the futility of his rushed and widely publicized execution. Alive, the only people to whom he presented a danger were those who might be mentioned in the evidence he could give in trials that will now not be conducted. Dead, he is a monument to his failed trial and the fictional government that has now taken its useless revenge on him. Some people will now try to turn him in a martyr, which can only further increase the level of violence in the world. As far as deterrent effect, his killing ought to prevent the survival of the sort of political movement he developed about as much as the hanging of Mussolini did.
Posted by Eric Gordy at 14:07 3 comments:

Ford passing on the right

How surprising to see Gerald Ford dominating the news. He lived a long time, and during his brief, accidental presidency, he showed himself to be not an especially capable politician. His pardon of Richard Nixon set a precedent for impunity that has been called upon several times, and won him the undying gratitude of the handful of people who circulate between high positions in Washington. He plucked Donald Rumsfeld and Dick Cheney out of obscurity and set their bizarre mix of sadism and ressentiment on the world. It is a wonder that he is remembered at all.

He did, however, have a sense of humor.
Posted by Eric Gordy at 12:06 No comments: 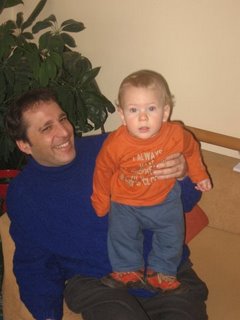 I'm back from my brief Balkan sojourn, partly unpacked with gifts properly distributed to their intended recipients. While there are many good things about being back at home, one that stands out is the ability to shower for longer than five minutes, without being confronted by the dilemma of whether to shower or shave today. Regular blogging to resume as soon as the inspiration strikes me.

Photo: Eric takes a moment for discussion with the youth of Niš.
Posted by Eric Gordy at 14:05 5 comments: