Sad farewells of the week 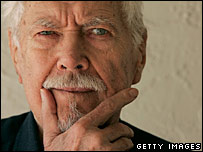 Ferenc Puskas and Robert Altman.
Posted by Eric Gordy at 18:14 No comments:

This video was taken by a student at the UCLA library. It shows campus police repeatedly using tasers against a student. An officer threatened to use the weapon against another student who requested a name and badge number. What is a taser? The name is an acronym for Thomas A. Swift Electric Rifle, and it is designed to stun a person by discharging an electric current into the body. Its intended use is to allow law enforcement officers to stop a highly violent individual without a high risk of causing death. It is on these grounds that such taser advocates as the company that makes them (duh) and several police agencies that use them (the RCMP, for example) defend their use. Controversies over their use have to do with their ability to cause death when they are used against people with certain medical conditions, such as heart conditions, and with incidents like this one at UCLA, in which they are used solely for intimidation against people who clearly and obviously present no danger at all. That is why organizations like Amnesty International highlight concerns about abuse of this weapon, and advocate that their use be suspended.

UCLA has done pretty much nothing to address the incident, other than repeatedly administering electric shocks to acting chancellor Norman Abrams until he issued a weaselly statement blaming the student for being attacked.

I am a graduate of the University of California, having got two degrees at the Berkeley campus. During my years there I provided them with a lot of free and below-market labor. It is a system with a good deal to be proud of, a fantastic faculty, outstanding library collections, an often okay record in dealing with a hostile state government. The administration when I was there did not generally contribute to the quality or reputation of the institution, and now that condition seems to have reached metastasis. As much as I believe in public education, this system is not getting one penny from me, ever.

Update: Was it enough for Norman Abrams to demonstrate that he is not capable of carrying out the job he holds? Apparently not, assistant UCLA police chief Jeff Young also had to show his complete lack of familiarity with the appropriate use of force. Does the Taser Corporation recommend using their device as a "pain compliance technique"? What kind of compliance is expected from a person who has been immobilised by pain? Here is the LA Times showing why the officers involved, their commanders, and Norman Abrams, who have already disgraced themselves and the institution that they represent for no apparent reason, should be fired and prosecuted:

Several local police agencies — including the LAPD and Los Angeles County Sheriff's Department — allow officers to use Tasers only if a suspect poses a physical threat or is acting combatively.

The sheriff's policies expressly say deputies can't use Tasers simply to move someone.

"We look for assaultive conduct," said Bill McSweeney, chief of the sheriff's leadership and training division "We generally don't use the Taser on passive resisters except when an individual indicates explosive action to follow, such as a verbal threat."

But UCLA police are allowed to use Tasers on passive resisters as "a pain compliance technique," Assistant Chief Jeff Young said in an interview Friday.

See the comments to this post on the highly charged atmosphere in Houston and Slovenia.

Another update: Does the UCLA police force screen its employees at all? Then perhaps they might have known why officer Terrence Duren was fired from the Long Beach Police Department. Or they could have used the evidence that was immediately available to them based on incidents at UCLA when he choked a student with his nightstick, and when he shot a homeless man. Or is a long history of complaints considered a positive recommendation?
Posted by Eric Gordy at 14:19 4 comments:

I do believe that this video is the most tasteless thing to which I have yet linked from this blog, at least in the video category. Not that I haven't tried. "Sonne, strand and šljivovic," apparently.
Posted by Eric Gordy at 01:02 2 comments: