My constitution is bigger than yours

At the well-known beacon of wisdom, the Belgrade law faculty, Kostunica proved that he knows where the word count button is in Microsoft Word.
The result: the new constitution is twice as long as the old one: 206 articles and 101.450 characters. Milosevic's constitution has only 135 articles and 50.503 characters. But we all know who really had the biggest one: Tito. His constitution has 254,894 characters (in the Slovenian version--could find the Serbocroatian version online) and 406 articles.
Posted by Florian Bieber at 23:28 No comments:

According to the latest survey by CeSID the referendum on the new constitution in Serbia might actually succeed--some 57% of voters said they'll surely go to vote for the constitution and another 24 % probably will. The primary motivation for voters appears to be a sense of civic duty (I guess the voters in France and the Netherlands last year are much worse at understanding their civic duties when they voted against the EU constititution). Considering the content of the next Serbian constitution, this is better news than the motivation being enthusiasum for substance. And, only one in ten supporters in the survey do so because of Kosovo.
For a good blog calling for a boycott see http://www.bojkot.info/
Posted by Florian Bieber at 22:56 No comments:

Things to do with construction leftovers

And why, indeed, should Slovenia not have its own island?
Posted by Eric Gordy at 01:52 2 comments:

Hodzic & Zelja vs. the Vegitarian threat

Some might have been following Richard Gere's adventures in the Balkans recently, trying to caputre Mladic etc. Now he has been the victim of the most foul kind:
As Fonet reports, "Gere becomes ill from the smell of cevapi" so what is done? The cevabdzinicas of Bascarsija had to be close for Richard Gere. Let's hope this is not a precedent and after smoking bans, there will be cevapi grilling bans haunting the Balkans.
Posted by Florian Bieber at 13:29 13 comments:

Now that torture is legal

Excuse me, the rule is now to call it "harsh interrogation." In any case, there may now be people wanting to join the U.S. Torture Corps.

Possibly of interest to anybody who regards the use of violence against suspects in an interrogation as necessary: I have recently been rereading an old favorite, Criminal Interrogation and Confessions, by Fred E. Inbau, John E. Reid and Joseph P. Buckley (3rd ed, Williams and Wilkins, 1986). This book is more or less the standard one used in the training of police detectives, and interesting in its own right mostly for its semi-hard boiled style (a little Nathaniel West, a little Erving Goffman, some Quentin Tarantino, simmer without stirring...). Inbau, Reid and Buckley are openly in favor of all kinds of deception and psychological tricks, and ofer a wide variety of suggestions for achieving them effectively -- peruse a file with nothing in it, pay attention to the distance between chairs, that sort of thing. They draw the line at two places, though. First, at the use of techniques that "would cause an innocent person to confess" (how well they achieve this is a matter of intense debate, and there is some good evidence that the techniques they suggest are more likely to produce coerced-internalized false confessions than they think). Second, they absolutely draw the line at the use of force or the "third degree," including threats and promises, both on the practical grounds that these techniques are likely to produce false information and on the legal grounds that confessions which are not voluntary are more likely than not to be rejected by courts.
Posted by Eric Gordy at 20:36 3 comments: 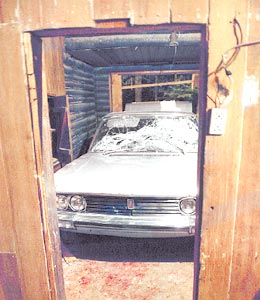 Juan Perón had a hard time with landings. When he returned from exile in 1973, his reception at the airport had to be held up while the different factions of his supporters continued their gunfights. His reburial in a new place has not gone well either. In the street battles that accompanied the event, in addition to dozens of people being injured (there is dispute over how many by bullets, how many by other means), the general's stylish old Fiat also bit the dust (photo). Why was the old fellow being buried again anyway, after a rest of 32 years with only three interruptions? It was to meet the demands of a woman who claims to be his daughter. Although el primer trabajador had no children with his two wives, he was involved with many people, some of whom were of childbearing age, so who knows.
Posted by Eric Gordy at 16:36 No comments:

This is just messed up

I don't know what to make of this. But my first response is: whacked out racist fantasy heavily influenced by the original Willie Wonka film (the one with Gene Wilder, not the one with Johnny Depp doing Michael Jackson-as-Wonka).
Posted by Eric Gordy at 16:38 5 comments:

I'll admit that as much as I enjoy an occasional dose of the character, I have not rushed off to see the film, since I figure one joke can only be stretched out for so long (case in point: the Bush administration). But now I may be changing my mind, since it seems to offer the opportunity to celebrate the return of Kazakhstan to its glorious Balkan kolijevka. Catherine explains how....

PS: Curious to hear some Kazakh music? Imagine finding it in a gulag.
Posted by Eric Gordy at 23:10 2 comments:

With all of the trouble in the world, it is reassuring to see the football fans of Čačak taking resolute action to address the global shortage of idiocy.
Posted by Eric Gordy at 16:38 2 comments: