Best wishes for a far better new year to everyone! We are off for an end of year road trip today (have never seen the mighty state of Maine, must take a peek at it), so I will not be posting. Until next year.
Posted by Eric Gordy at 15:33 5 comments:

Documents on "rendition" and torture in Uzbekistan

This information comes by roundabout way of Jesus' General, who has satiric and nonsatiric takes on it. Craig Murray was recalled as UK ambassador to Uzbekistan after raising concerns about the use of torture to obtain evidence evidence passed on to the Foreign Office by the Uzbek security services. He documents his exchanges with the Foreign Office over the matter. Now the former ambassador is in a conflict with the Foreign Office over the manuscript for his book -- they would like him to remove all references to documents indicating the practice of torture and rendition. In particular, the concern relates to two documents, one of them (in PDF format) the telegrams sent by Murray to the Foreign Office compaining about the practice, and the other a legal opinion declaring the use of evidence obtained by torture not to be a violation of the UN Convention on Torture. Mr Murray is refusing to suppress the documents, and has published them on the Web instead. The Guardian reports as well.
Posted by Eric Gordy at 13:01 No comments:

You can now find the work of many of many of your favorite Croatian bloggers aggregated and organised by topic at Bestseler, the blogerski onlajn magazin. Worth a daily visit, no question!
Posted by Eric Gordy at 22:13 No comments:

People with whom I am proud to have crossed paths 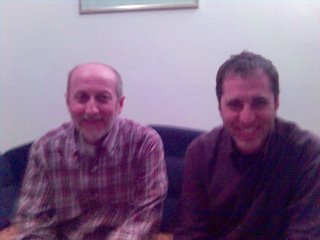 One of them (with me in the photo) is Nikola Božilović, a sociologist from Niš. He has released two excellent studies of popular culture, one of them an exhaustive investigation of what rokenrol means in the history of the world, and the most recent one, Kič kultura, a multidisciplinary explanation of the varieties of false glamour in entertainment, politics, and cultural life. His work asks people to take seriously the things they encounter, no more and no less.

I am also delighted to have made the acquaintance of my brilliant friend's brilliant sister, the theatrical writer Milena Marković. I got a copy of her recent documentary film, Minerska opera, which records her experience in the dying mining town of Bor, where she and a group of local people staged a production of Bertolt Brecht's Threepenny opera. The film records the production, but also the joint efforts of the director and the locals to apply the aesthetic of the opera to their own hopeless situation, as seen through the experiences of two miner-musicians. The romantic guitarist Miki finds beauty in a variety of original and Communist songs ("Comandante Che Guevara," "O bella ciao," and "Bandiera rossa," the last two in a version most clearly derived from their performance by Pankrti), while his friend Lovke wanders around in search of a substitute for the romatic sounds of his youth, but is sure that he likes the aroma of the burning trave from his bottles of rakija. Mrs Ethnia and I (mostly she) did the English subtitles for the film -- we are still not sure that we did this honest work of art justice, but are proud to have had any kind of involvement with its production.

These are just two of the people who, during my last visit to Serbia, made me feel lucky to have some exposure with that part of the world. Sometimes I get the question as to whether I am "pro-Serb" or "anti-Serb." I have no idea what the question means. Actually, I could phrase that better: I know what the questioner thinks it means, but it makes no sense to me. I am in favor of honesty, creativity and hope. I admire the people who offer those things.
Posted by Eric Gordy at 02:20 3 comments:

Eh, maybe. The arrest of Ante Gotovina means that Serbia now has a monopoly on the fugitive racket, not a very enviable position. The special prosecutor for war crimes made an enigmatic announcement, suggesting that he might know something but was not about to do anything. The interior minister made a petulant remark, blaming the preceding government for not having made the arrest (but implying, correspondingly, that his government might). A former police official made a dramatic claim, suggesting that negotiations were under way (but he is not in a position to know). And so today Danas editorializes that public opinion is being prepared for an arrest and extradition. Since we have all been here before, we can only wait and see.

Update: New reasons for not doing their job are blooming like a thousand flowers. Interior minister Dragan Jočić says that it is difficult to find people charged with genocide, because "they are experienced warriors, people who spent the war under difficult conditions and survived." Indeed, it must have been terribly difficult to wage war against unarmed civilians, but this hardly makes for warrior experience. Not that Jočić would have a basis for comparison. Manwhile, Kurir is raising the alarm (by way of Index.hr) that Mladić may prefer committing suicide to surrender. But since Mladić is not a civilian, we doubt that Mladić will kill him.
Posted by Eric Gordy at 21:57 9 comments:

The first ever East Ethnia poll!

Give your answers sometime between now and 5 January. Choose multiple answers if that is your inclination. Alternative answers or answers with explanations are welcome in the comments. 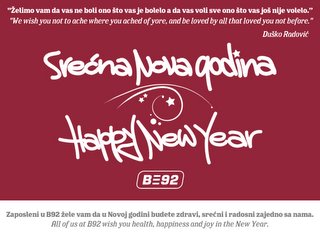 Having no talent for design of my own, I thought I might share with you the holiday greeting I got from my favorite media outlet.
Posted by Eric Gordy at 17:22 No comments:

The difference between knowledge and action

So Serbia's war crimes prosecutor Vladimir Vukčević says that he knows who is aiding Karadžić and Mladić. Or at least he has announced as much. But this seems like an odd thing for a prosecutor to announce, since he has neither named nor charged the people in question. Other agencies that might feel called upon to do something say that it is the job of the Bezbednosno-informativna agencija (BIA). But they have been too busy spying on parliamentary deputies in order to anticipate their votes, it would be a bit much to expect them to do any sort of job.
Posted by Eric Gordy at 16:20 No comments:

How tight was the connection in Paris? Let's just say that it was the first time I ever had to go up those steps leading to the plane and knock on the door in order to be let in. Otherwise the return was fine, my apologies for not posting these past few days but I ran out of hours on my fabulous dialup connection in Belgrade and had to see so many people that there was no time to go and buy more.

Much happened in between posts. Some of the perpetrators of the Ovčara massacre were convicted, and more are promised. The trial of the incidental players in Bosnia's most horrifying home movie began with the code of silence breaking down. Vojvodina's assembly set forth an initiative to ban neofascist groups, and the Serbian "diaspora" ministry promised (but did not deliver) an amnesty for people who refused military service in the last batch of wars. That is just a bit of the main stuff.

Burek from Prokuplje became a hit import product in Germany, and a proposal by a group of Croatian linguists to make the language sillier did not. A new Russian TV adaptation of The Master and Margarita became a huge hit.

On the culinary front, one friend taught me to make the dough for burek (it's not as complicated as it seems: it involves the strategic use of butter and a sheet, and the presence of Marlon Brando is not required -- and vinegar goes into the dough!). Another made me wild asparagus from Istra. The burek friend's daughter passed her last exam in architecture, so we made a Mexican dinner in her honor: salsa, arroz a la mexicana, chicken in a pepper and cream sauce, and of course Cesar Cardini's famous salad.

For a musical photo gallery of somebody more capable than me making burek, try this site. Thanks, Mirko!

Time now to rest and spend a bit of time with the family. To any of East Ethnia's readers who celebrate Christmas today, a happy Christmas to you!
Posted by Eric Gordy at 14:57 No comments: