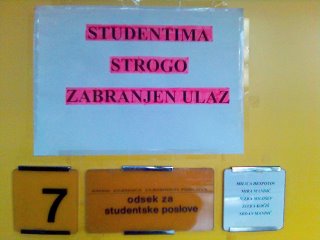 Just an ever-so-brief note to the people who are kind enough to read here: you may have noticed that posting has been less frequent, and that is because the semester has begun. I am East Ethnia by night, and by day a mild-mannered professor of sociology at the fetching Clark University. This semester is the "heavy" semester (three classes instead of two), so a lot of time goes to teaching and related activity. I am trying to eliminate the use of paper as much as possible, and make as much activity as I can electronic. You are welcome to follow that bit of cyborg academia at The Iron Cage, should you care to.

Amusing photo courtesy of Srbovanje.
Posted by Eric Gordy at 14:11 No comments:

Dragan Vasiljković arrested in Sydney. More news as it happens.
Posted by Eric Gordy at 02:21 3 comments:

Annoying little brother would like someone else to be watching you

Horrors! There may be people in the field of education with perspectives different from the ones held by the people currently in power! At one institution, students have the ability to make a little pocket change by ratting them out. This is the service promised by UCLAprofs.com, which invites students:

"Do you have a professor who just can’t stop talking about President Bush, about Howard Dean, about the war in Iraq, about MoveOn.org, about the Republican Party, about the Democratic Party, or any other ideological issue that has nothing to do with the class subject matter? It doesn't matter whether this is a past class, or your ongoing class this winter quarter.

If you can help UCLAProfs.com collect information about abusive, one-sided, or off-topic classroom behavior, we’ll pay you for your work."

Their price list ranges from $100 for surveillance and recording, $50 for technically unaided surveillance, and $10 for hearsay. The material goes to support the essayistic impulses of the group's president (and only member), one Andrew Jones, who would like to be a major-league right-wing provocateur and thinker once he learns to assemble a sentence. His previous achievements include a public stunt to sell cookies to people at different prices according to their ethnicity, presumably to show that there is no such thing as discrimination. Isn't that clever?
Posted by Eric Gordy at 04:01 2 comments: 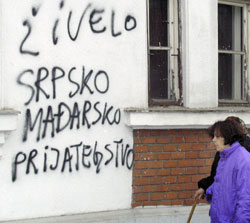 In the spirit of the photo of the day from Dnevnik, I offer you my recipe for stuffed onions in the style of the world onion prestonica, which is not Walla Walla (as I was raised to believe) but Makó.

For the osnovica:For the sauce:

About town for a tenth of a veka
Then in barracks ga penzija čeka
They searched hard (or they didn't)
The far right says they shidn't
Not in Russia? Well then, Crna Rijeka
Posted by Eric Gordy at 14:39 2 comments:

There is a lot of nice stuff to download from the site of the legendary Disciplina kičme (or if you prefer, Disciplin a Kitschme). Including clips from several versions of the song that has been repeating in my head since it was released: Političari virusi - čekaju me u zasedi - svako jutro svako veče - su mi u kompjuteru. Addictive. I was reminded of them again by this interview with Koja at the delightful kulturpunkt.hr.
Posted by Eric Gordy at 03:51 3 comments:

When he was director of RTS, Dragoljub Milanović used the inside information to which he had access to save himself and his high-ranking staff from the bombing of the RTS headquarters (which was indeed, since you asked, an illegal attack -- see Arts. 48-51 -- against a civilian target), while sacrificing the lives of sixteen of his lower-ranking employees. Now the families of those sixteen victims are complaining that while serving his sentence for his responsibility in their deaths, Mr Milanović has access to some extraordinary privileges, including weekends off and vacation time. They blame justice minister Zoran Stojković. Perhaps Mr Stojković has forgotten who is no longer in power. Or maybe it only seems that way.
Posted by Eric Gordy at 00:13 4 comments:

In the United States, today is a holiday dedicated to the memory of Martin Luther King, Jr. So it is not all a bad day to pay a visit to Stanford's MLK papers project and have another look at his 1967 address "Beyond Vietnam," among the other resources the good folks in Palo Alto have prepared.
Posted by Eric Gordy at 18:31 1 comment:

The ethical predicament that isn't

Over at the Post, Howard Kurtz finds himself in a "murky maze" that makes it hard to see "the right course of action." Here's his problem:

Should major newspapers and networks have agreed to suppress the news that Christian Science Monitor stringer Jill Carroll had been kidnapped in Iraq? The impulse is understandable, given the Monitor's plea that publicity might endanger negotiations to win her freedom. But since when are journalists in the business of sitting on news? And would they have imposed a 48-hour blackout for a non-journalist?

The first part seems rather easy to me. There's two goods the editor has to weigh up against one another: the right of readers to be informed of important news and the obligation of the paper not to endanger anyone through their coverage. Where's the conundrum? Does Kurtz really think amusing the liberal middle classes over their Sunday breakfast is a higher good than potentially protecting the life of a fellow reporter -- or indeed any fellow human being?

And that answers the second part of Kurtz' predicament.
Posted by T K Vogel at 12:03 No comments:

ICTY has already changed its indictment against Jovica Stanišić and Franko Simatović -- Srebrenica is in, and Ovčara is out. Now there may be pressure for Serbia's prosecutor for war crimes to change its indictments against the "Scorpions." Insajder is promising the details in tomorrow's broadcast, but here is a tidbit from today's announcement of what will come tomorrow:

"According to Insajder's information, the 'Scorpions' were transferred to Bosnia at the beginning of the summer of 1995 by order of Jovica Stanišić and Franko Simatović. The goal of transferring the unit was to create the impression that something was being prepared near Sarajevo, so that Bosnian forces would move away from their positions around Srebrenica. This was agreed at a meeting in Dalj between Stanišić, Goran Hadžić, and Milan Milovanović Mrgud, who was one of the originators of the 'Scorpions.' However, the indictment by the special prosecutor for war crimes only includes those individuals who were seen on the video recording [of the execution of prisoners in 1995]. The people who ordered the crime to committed are not included."

Taking this sort of information into account would be a major step for the special prosecutor, which already had a major success in December with the conviction of some of the perpetrators of the Ovčara massacre. At the time prosecutors promised that the conviction of perpetrators was the beginning of their work on war crimes cases, not the end. How far a domestic prosecutor can carry an investigation is a good sign of how well domestic courts will be able to do the work that ICTY has not done.
Posted by Eric Gordy at 17:48 No comments:

The issue is actually dated 3 January, but it is new to me. The January 2006 issue of Hidden Europe has articles on the cultures of Sardegna, on the suburbs of Bratislava, on the search for the perfect dumpling, and several other burning questions. Sure to interest readers of this site.
Posted by Eric Gordy at 17:39 4 comments: