I had been thinking of giving you a play-by-play of Sunday's elections, but instead the invitation to vote at the consulate that Mrs Ethnia got in the mail persuaded us to use the event as a (hardly necessary) excuse to spend the weekend in New York. I'll be back with analysis as quickly as I can, though.
Posted by Eric Gordy at 22:47 No comments: 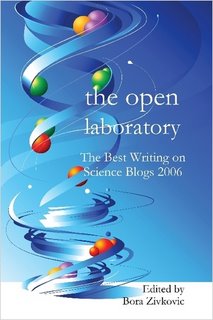 Biologist Bora Coturnix has been edutaining the world for a while with his blogging on science, politics, and the relations between the two. Now he is coming out with a new book he has edited, The Open Laboratory: The Best Writing on Science Blogs 2006. And he is collecting nominations for the 2007 edition. In the meantime, you can buy the book.

Quotation of the day

A week to election day

In anticipation of the parliamentary elections in Serbia a week from today, an assessment and some hesitant predictions. Making predictions is usually a foolish enterprise (if it is not obvious in advance what the result will be, then the only way a prediction can be correct is by chance), but why should that stop me?


As much as I am not fond of Mr Koštunica and his DSS, and even less of his coalition partners, they deserve credit for what has got to be the most skillful effort to transcend political conflicts and issues in a political campaign. Everything from the campaign slogans "Živela Srbija" (živela!) and "Narod najbolje zna" to the new year concert which appeared to bring together opposed social forces, in this case Ceca and a random selection of rokeri, succeeded in being both memorable and content-free. Although they will probably end up with a third or fourth place finish next week (there! a prediction!), they have given the media impression of being a party of power about which other parties talk. It is easy to agree with the assessment by Dragoljub Žarković that Mr Koštunica has assured his success by outperforming the very low expectations which people had of him.

For the most part the opposite has to be said about the party that stands to gain the most from the election, DS. They act like a party of power which runs in terror from the risk of saying anything that prevents them from being all things to all people, and to top it off is not in power. The move of naming their candidate for PM, former finance minister Božidar Đelić, might help them, in the sense that he is a figure who is respected by many, despised by few, and comes forward with a clear program that he has recently published. The announcement may have come too late to help them much, but DS has calculated, probably correctly, that their best hopes are fuelled by inertia and dissatisfaction with the current government.

A few of the parties are in the race mostly to save themselves from oblivion. A few of them (like G17) may succeed in this, and some (like SPO, SPS, and a few curiosities) will more likely fail. But the most interesting reemergence from oblivion has got to be the campaign of the Čedomir Jovanović vehicle LDP. Shut out of his previous party for his radicalism and overreaching and because of a reputation (whether it is deserved or not) for corruption, Mr Jovanović will most likely come out of this election at the head of a parliamentary delegation, and will certainly come out with recognition as a force to be reckoned with. A sign of his power was observable during my visit last month, when LDP posters were the most obvious and frequent targets of anticampaigners and vandals -- there is probably something to the principle that whoever is being attacked most is probably threatening somebody who ought to be threatened. Another sign was apparent last night at the new year celebration/election rally hosted by DSS, at which a discredited former pop idol in a hat he borrowed from Branimir Štulić dedicated an insulting song to the party leader. If the best attack is an accusation of being a drug addict coming from a drug addict, this is pretty close to a sign of having achieved untouchable status.


The biggest open question of the election, of course, is with how much power SRS will emerge. It remains popular for government officials and NGO types to use the threat that the extreme right may come to power in order to extract money and support from the internationals. This is still happening. But the SRS campaign has been strangely quiet. It may be that they are running low on resources and that their original campaign plan to capitalize on the suicide of the party leader was scuttled by Mr Šešelj's failure to comply. On the other hand, the greatest advances by SRS tend to take place under the radar. It is a matter for research whether what happens under the radar is the mobilization of dissatisfaction or the engagement of clandestine services. But I will go out on a limb here -- the only time SRS has been close to ruling has been when there was a dictator willing to put them into that position. Their supporters will turn out, as they always do, and provide them with enough representation to assure that they have access to the publicity for scandalmaking well into the future. But they will underperform expectations, and will never be close to forming a government by legal means just as they never have been before.


What does this all amount to? Probably not much, which is either a disappointment or an achievement in itself, depending on how you look at it. I am guessing that the next government will be an everyone-but-SRS coalition, and that DS will be slightly more influential and DSS slightly less influential.

I received this essay from a mailing list I subscribe to today. Apparently it is the transcript of a lecture by P. Sabin Willett, "My worst moment as a lawyer." It goes over justifications for torture, the way prisoners are produced, and a defendant who decided to give up.
Posted by Eric Gordy at 14:14 2 comments: