After reading this fascinating item from Laura Rozen on what have to be interpreted as ideological litmus tests by the State department for choosing which Americans go as representatives to other countries, I came across this news item on the appointment of Frank Wisner as the US representative to the status talks on Kosovo. Frank Wisner is an interesting fellow. Not as interesting as his father, though.

Update, 4 December: (Thanks, Chip.) That's not all! Look who has been appointed as deputy director of USAID, in charge of all programs to promote democracy and good governance overseas! Since Mr Bonicelli is a dean at Patrick Henry College, which promises "conscious torment for eternity" to people with religious views different from those of the institution's administration (who are "by nature sinful and inherently in need of salvation"), he should fit right in.
Posted by Eric Gordy at 17:35 6 comments:

Some vague information on the Bondsteel allegations

What with all the talk of "secret CIA prisons" around the world, including Europe, there has also been some discussion (little solid evidence, though) that Camp Bondsteel in Kosovo may have been used as an oversight-free holding facility. I haven't posted anything on the topic so far because I have not seen conclusive reports that would suggest where there is anything serious to the stories or not. Today I received this item from friend of East Ethnia AR: the Montenegrin MINA news agency is quoting the UN ombudsman for Kosovo, Marek Antoni Nowicki, to the effect that "there was no doubt that Kfor [NATO-led Kosovo Force] had prisons in the southern Serbian province [of Kosovo-Metohija], which were beyond external, civilian and judicial control and this justifiably raises the question of what had occurred there," but that since he had no jurisdiction "we virtually know nothing about what goes on there." No indication of times, the size of the facility, who was held in it, or what happened, but something nonetheless.

For more on this story, and a broader reflection on the final status of Kosovo, see what Talos and Doug have to say.
Posted by Eric Gordy at 19:25 2 comments:

I do not know whether this is a hoax or not, and it seems to me the fellow hasn't moved yet (although contingency is a concept that travels well). But if it is not, then Paddy Ashdown's vikendica on the shores of Jablanica lake is available. Fishing, swimming, barbecue, a vegetable patch, all "reached via an electronic gate off of the main road from Sarajevo" and available for 200.000 Euros.
Posted by Eric Gordy at 23:05 3 comments:

Bora wants to know what proportion of visits people's (presumably US-based) blogs are getting from outside the US. I am only too happy to comply, of course. 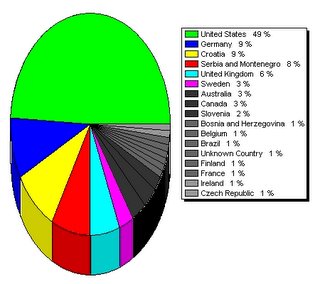 It is not too surprising that a majority of the visits here should be from outside the US, since most of what gets written about here is not about the US. There are some limitations, though: the tracking program that I use only records (at least in its free version) the past 100 visits. Depending on the topic of the moment, the proportions can change wildly. It also looks like there is one visitor coming from a place called "Unknown country." That sounds very exotic, and I am sure it is a place I would like to see.
Posted by Eric Gordy at 21:52 2 comments:

How many fatalities in the BiH war?

The researcher Mirsad Tokača, on the basis of the documentation gathered by his Istraživačko-dokumentacioni centar, disputes the most frequently used estimate that between 200,000 and 300,000 people were killed, and gives his estimate at just under 100,000 victims, of whom 70 percent are Bosniak, 25 percent Serb, and 5 percent Croat. Aware of the ways in which this estimate is likely to be used, Tokača explains, "in ideologised societies controlled by neither rationality nor empiricism, but political conclusions, we see either the complete denial of crime or, on the other hand, their exaggerated presentation. The character of the war in BiH does not change if we give a real number. We do not need untruths and myths about victims." Like all estimates of war victims, of course, this one is constrained by the fact that reliable records or testimonies do not exist in all cases, and that data which would allow for reliable demographic analysis (like a postwar census) are also not available.
Posted by Eric Gordy at 11:52 7 comments:

Rehabilitation notes from all over

The web site of the Serbian Ministry for the diaspora opens with a photo of Draža Mihajlović (followed by Vuk Stefanović Karadžić, Nikola Tesla, Mihailo Pupin, and Saint Sava) that links to a Bosnian Četnik site, B92 reports. Svetlana Velmar Janković is waiting for a law that will declare her father, a high ranking official in the "government" of Milan Nedić, to have been something other than what he was. And the Institiute for literature and art has submitted agitprop poetry in a faux-epic mode celebrating Radovan Karadžić and Ratko Mladić to UNESCO's cultural heritage program.

So you got that? Draža belongs with the scientists and saints, Nedić's deputy ministers belong in the company of respectable human beings, and Karadžić and Mladić are epically heroic subjects of global cultural significance. And I am Marie of Romania.

Update: The ministry has removed the photo.

Update again (1 December): Draža is back. Master of disguise.
Posted by Eric Gordy at 15:16 12 comments:

"The closer to the true way of Kung Fu, the less wastage of expression there is" --Bruce Lee 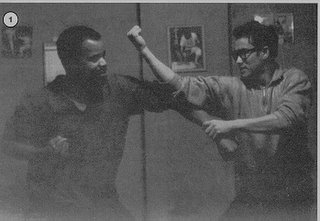 The gesture of putting a monument to Bruce Lee in the center of Mostar (facing north so that neither the people in the eastern nor the western part of the city interpret him as being ready to fight for them, but also with his butt facing both enclaves) was probably meant as clever parody, directed at two enclaves divided by a common history and burdened with calls to misguided hero-worship. It is also a reminder of the difference between the battles in his classic martial arts films, where struggle is related to moral categories and the warriors share in a code of mutual respect, and the battles in the region's recent wars, which operated according to different standards. Maybe it is also a reminder of the way that Bruce Lee combined his talents and unique presence to contribute to undoing a long tradition of ethnic stereotypes. Mostarci could do worse than to follow the philosophy that Bruce Lee encapsulated in his slogan, "Using no way as way, Having no limitation as limitation.” His stance against the constraints of classicism and tradition may well have some lessons for people seeking paths through unenviable conditions. There is more here than an ironic gesture toward the fame of an old film star and the incapacity of a political community.

Update: Someone in Mostar seems not to have appreciated the effort taken on their behalf. Nataša Krsman comments.
Posted by Eric Gordy at 20:06 No comments: