In the event anyone should succeed in getting this page

Yes, I do know that the problems with Blogger seem to continuing. I cannot get East Ethnia to load myself, despite my powerful connections. Presumably they will be able to fix this at some point, but in the meantime I am headed off for a trip. If everything is up and running, your regular service ought to resume here on Wednesday.
Posted by Eric Gordy at 22:55 4 comments:

While you were away

Blogger seems to have been having some difficulty, with any luck whatever problem there was has been resolved.

Today has turned out to be a bad day for conspiracy theorists. An autopsy of Slobodan Milošević did not find traces of the drug about which everybody has been speculating. On the other hand, this may turn out to be just fine for conspiracy theorists. It has also been a bad day for museum directors, who can apparently be overruled on the question of what exhibit from the general interest area of necrophilia can be placed in their institutions.

For everything else around questions of burials, memorials and museumgoing, Viktor is keeping the world posted (with illustrations!). Highlights: the death announcement from the symbolic Ćurčići in Politika, and photos.
Posted by Eric Gordy at 18:55 9 comments:

Požarevac: The trouble with Harry 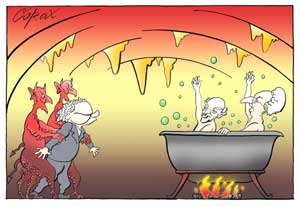 The Body of Evidence couldn't make it to Moscow. Belgrade doesn't want it, the government won't recognise it, and the military won't honor it. There is concern in the cemeteries that it may end up near the bodies of decent people. So the family has decided to bury it on their own property in Požarevac.

Reports of mourning aside, not all citizens are happy to rejoined by the dictator they removed. Have a look at the comments (219 of them and counting) on B92. There is talk of an "anti-burial" to coincide with the autoamnesty festival on Saturday (see the announcement reproduced on Viktor's Belgrade Blog). SPS is failing in its effort to organize a public viewing. The parties of the old regime are threatening to bring down the government if they do not get symbolic satisfaction, and SPO is being invited to bring down the government if they do. Expect some ugliness on Saturday as the "two Serbias" meet again.

Meanwhile, the American far right radio host Rush Limbaugh has made his own contribution to the flowering of conspiracy theories. Clinton killed him, por supuesto.

What was Milošević taking?

The drug in question would seem to be rifampicin.
Posted by Eric Gordy at 12:27 11 comments:

A bit of a controversy is brewing over the causes of the death of Slobodan Milošević. While it is far from rare, given a combination of preexisting conditions, stress, and unhealthy habits, that a person's health should fail, much is being made of the fact that Mr Milošević should have passed just at the time that his trial was (or, possibly, was not) nearing the end of oral presentations of evidence. So his death has given rise to a number of conspiracy theories. None of these are based on anything like reliable evidence, and some of them may be products of how the various conspiracy theorists think the trial was going.

The people who believe that the prosecution was well on the way to a conviction (most prominent among them, the prosecutor) have raised the possibility that the accused may have committed suicide. There are two versions of the story in the rumours: one is that he refused the medication he was given for high blood pressure, as suggested by the Russian physician with whom he consulted, Dr Leo Bokeria. Another is that he may have been (surreptitiously) taking another medication to counteract the effects of the blood pressure medication which was prescribed to him, which is being suggested (we do not know yet on the basis of what source) by the journalist Heikelina Verrijn Stuart. The center of the controversy is around an unconfirmed report from an anonymous source, claiming that an unspecified drug used to treat leprosy had been found in Mr Milošević's blood.

If the report of an unspecified drug is true, Mr Milošević's supporters have their own version of the story of how it got there. His legal counselor Zdenko Tomanović told reporters that Mr Milošević had written to Russian diplomats the day before his death, mentioning a mysterious drug and raising suspicions that his doctors may have been poisoning him. So in this version (promoted by people who believe that the prosecution's case had been going badly), he was killed by poison, presumably either to silence him or to avoid an acquittal.

Conspiracy theories are productive! So choose your version, was he poisoned, and if so by whom? Did he gamble with his health and lose? Did he commit suicide and invent a poisoning cover story? Was somebody else poisoning him? There is enough material for a soap opera to continue into several installments here, and as yet none of the reports of strange drugs having been found are confirmed.

There are clear advantages to the Milošević camp in continuing to level charges against the medical and prison staff engaged by ICTY, and of course it is entirely possible that some charges are valid and some are not. If it is the case that Mr Milošević was refusing medication, the consequences of this are entirely his own doing. If it turns out that somebody not on the medical staff was bringing him drugs, this complicates the story, but still hardly reflects well on the management of the ICTY detention facility.

Then there is the whole appalling symbolic framework: Mr Milošević built his political movement on the ideological trade in dead bodies from the past, now he has become a commodity in that trade. This discussion develops three years to the day after the death of Zoran Đinđić, who was indisputably murdered, we know by whom and for whom.
Posted by Eric Gordy at 19:58 9 comments: