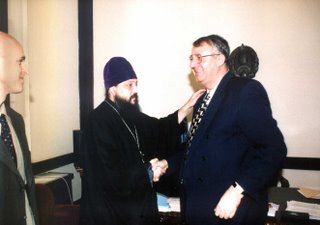 Vojislav Šešelj began his diet on 11 November, and ended it today. So he stuck with it just under a month, longer than I usually manage such things. Of course, he and I have in common that hunger is a choice for us, which distinguishes us both from the people who were forced into poverty when Šešelj was in power.

In other news, a mere seven years after his murder, prosecutors seem ready to bring to an investigative judge the case of the killing of Slavko Ćuruvija. Says the special prosecutor, "all indications are that it was a political killing."

Photo: Vojislav Šešelj is welcomed back to the ranks of the gluttonous by the members of Midnight Oil and ZZ Top.
Posted by Eric Gordy at 16:03 3 comments:

Here is one from Danas, on the basis of a survey of 1700 potential voters by the "Scan" agency, as reported by the funnysurnamed director of the agency, Milka Puzigaća:

Matters change when the results are calculated on the basis of respondents who say that they are certain that they will actually vote in the election. Then it looks like this:

So the main difference in comparing all respondents with likely voters applies to the results for DS and SRS. This is because the highest percentage of SRS supporters (75%) declare an intention to vote, fewer supporters of DS and the LDP-based coalition say so (60%), while only half (50%) of SPS and SPO supporters declare they will vote. The reporter for Danas, R.B., did not give figures for DSS supporters -- R.B., are you reading this?

I say 1) it's too early to make predictions, and 2) the track record of preelection surveys in Serbia does not give much reason to treat results of this type as anything other than a curiosity, good for half a beer's worth of conversation. At the same time, it hardly offers a reason for headlines like the one accompanying the article by Radovan Borović (hey, wait a minute--R.B:?) in RFE-RL, "Šešeljev štrajk povećao popularnost Radikala." No it hasn't, and the higher of the potential results is still lower than their most recent result.
Posted by Eric Gordy at 02:43 3 comments:

Did the "Zemun clan" plan to assassinate former Croatian PM Ivica Račan as a way of returning the favor of assistance from Croatian criminal groups in the assassination of Serbian PM Zoran Đinđić? Novi list reports that they did, and Račan says that he received similar information.
Posted by Eric Gordy at 17:20 5 comments:

Background on the news item of the day

For anybody who is interested, here is the report of the tzv. "Iraq study group" which was released today. And the cartoon version is here.
Posted by Eric Gordy at 17:14 2 comments:

More on the Dutchbat medal

The award of medals to the Dutchbat 3 soldiers who abandoned the civilians they were obligated to protect has certainly got a response! Participation in the “Aferim!” campaign (linked in the previous post) promoted by the student radio station of Sarajevo has been worldwide in scale, and there have also been press responses. This modest site has not been immune from it, either, since I posted an item on the issue yesterday. Usually East Ethnia gets somewhere between 100 and 150 visits a day. So far today there have been over 1500 visitors (and it is not yet noon here!), nearly all of them from the Netherlands, with a wide variety of responses being left in the comments. Some people are expressing agreement, some offer a different perspective, and some disagree quite vehemently. Of the ones who disagree, there seem to be a few who are under the mistaken impression that the whole issue involves somebody’s mother – I am not quite sure where this association comes from. Leaving those remarks aside, the comments offered in defence of the soldiers of Dutchbat would seem to call for me to define a position more precise than simply outrage at the awarding of medals for abject failure.

First of all, in what does the responsibility of Dutchbat consist? At bottom, in dereliction of duty. Their job was to protect the civilian population, and when the moment of decision came, they decided to protect their own personnel instead. Some of the arguments in defence of Dutchbat come down to pointing out that an effort to protect civilians would have put the soldiers at risk. This can only be persuasive if one fails to distinguish between soldiers, who take on risk as a condition of their employment, and civilians, who do not.

This is of course not the whole story, and a whole variety of other failures (as well as factors contributing to those failures) are detailed in the NIOD report, as well as in other places. In addition to political and military failures and misunderstandings, there were cultural ones, many of them detailed by Guido Snel in a very interesting reflection.

A more persuasive objection has to do with the unenviable situation in which the Dutchbat forces found themselves. The elements of this are summarized in the announcement of the NIOD report. In essence, the unit had poor instruction, poor information and communication, and inadequate support. Some of this was the result of vagueness in the conception of the UN “peacekeeping” mission in Bosnia-Hercegovina, and some of it was the result of decisions made by military commanders from Dutchbat and from forces commanded by the military of other countries.

Some of the problems have to do with problems endemic in the activity of “peacekeeping” itself. In situations in which there is no peace to keep, the activity can – and does – easily devolve into auxiliary support for the warring parties, and peacekeeping forces can easily be used as a secondary strategic resource. Many of the problems have to do with a lack of political will on the part of the UN and the most influential international political actors to take any action that went beyond giving the appearance of concern. That is to say, some of the responsibility for Dutchbat’s dereliction of duty can plausibly be transferred to other actors. This does not diminish the obligation of the commanders to act in accordance with international law and in the interest of the people they are bound to protect. How well this obligation was carried out is illustrated in the photo in the post below, showing colonel Kerremans raising a glass with Ratko Maldić. Živeli, a potom više nisu.

Probably it is the case that minister Kamp saw the distribution of medals as a gesture of reintegration of the soldiers, some of whom must have been traumatized by the obvious failure of their mission, and some of whom were deterred by their commanders from doing what a soldier is obligated to do. This sort of situation may call for therapy, certainly calls for action against the commanders and review of procedures. But a medal on the chest of an accomplice is a slap in the face to the people who trusted and depended on the forces that failed them.
Posted by Eric Gordy at 16:39 16 comments: 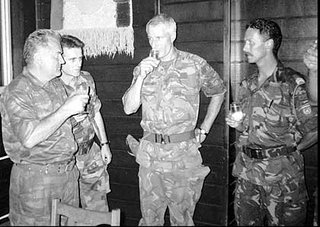 While the troops commanded by Ratko Mladić (price: 600 million Euros) carried out the massive killings in Srebrenica, the Dutch peacekeeping troops who were there to protect the victims did nothing. Today the members of that infamous Dutch battalion were presented with medals by their defence minister. Minister Henk Kamp says that in trading thousands of civilians under their protection, for summary execution in exchange for fourteen Dutch officers, Colonel Thom Kerremans and the rest of Dutchbat III "did their utmost." As Mr Kamp is doing, no doubt. Here is a site at which you can send a postcard of congratulations to the Government of The Netherlands, the Embassy of the Netherlands in Sarajevo, the brave soldiers of Dutchbat 3, and the Netherlands Ministry of Defence. Bravery is as bravery does, after all.
Posted by Eric Gordy at 17:58 31 comments:

Sevdah on my mind 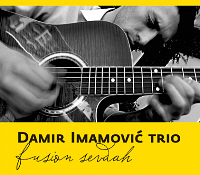 A friend of a friend of East Ethnia is a friend of a friend of mine, and Damir Imamović is a friend of music as well. The page linked in the last sentence is nicely designed but still awaiting its content. However, there is another page at Myspace where you can see who the musicians are, find out about upcoming performances, and download three examples of "fusion sevdah." About those upcoming performances, one of them is 12 December at the Terazijsko kazalište (two days before I arrive in town, na svoju veliku žalost). There is hope for all those people unfortunate enough not to be in Belgrade that day: they can buy the group's album for a mere nine and one half Euros, less than the price of your average published work in the social sciences.
Posted by Eric Gordy at 16:08 1 comment:

New (to me) in the blogosfera

Obviously I will have to be updating the link list. I haven't done it in ages and hope to do it soon. In the meantime, you will probably enjoy the culinary and musical explorations at Dumneazu.

In other news that will force me to deal with my aging link list fairly soon, the Serbian Mess blog has a new name and location, or so one hears anegdotally.
Posted by Eric Gordy at 17:14 No comments:

Being of sound mind and body

The Serbian Radical Party gave a public presentation of the political testament of Vojislav Šešelj. The fact that he is not dead only presents a problem to those for whom the distinction between the living and the dead is meaningful. Dakle, not for SRS.
Posted by Eric Gordy at 16:16 No comments: