Moderate progress, within the limits of the law

Recognition where it is due: there was a time, for eleven or twelve years there, when the only reason to read the once-mighty daily Politika was for a bit of ethnographic voyeurism, to see what parts of their fantasies the bizarre characters of the old regime imagined were respectable enough to put out into public. It was kind of like the early-nineties work of Madonna, only inclining more to the horrifying than to the entertaining. Since late 2000 it has changed a bit. Now reading Politika is a little bit like shopping at Filene's Basement -- it's not that there is nothing worthwhile to be found, but there is a lot of other stuff to plow through before you find it. More recently the paper has also massively improved its graphic design, I am told through the services of the mighty Mirko Ilić. Now Politika has introduced a new web site. It is an improvement on the old one, but the old one was a disaster. Before they offered fewer than ten articles a day and took them all down after three days, with no archive. Now they offer many more articles, giving at least an impressionistic overview of the major sections of the paper. The selection is a bit odd: today they lead off with a long-range weather prediction, for example. They still do not provide an archive; every other major Belgrade paper provides a complete online archive.

The new Politika web site is a bit like the new Politika. It is better than it was, but considering what it was, it would have been hard for it to be worse. Bit of a synecdoche, really.
Posted by Eric Gordy at 22:53 3 comments:

Understatement of the day from EU pillar in Kosovo ('Invest in Kosovo'). I am glad that in the section they did not dwell too much on the stabile political system part. 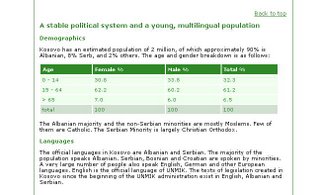 A new resource for language learners

Many years ago when I took a course in the language called Serbo-Croatian, the text we used was mostly oriented toward literary translation, in the spirit of most of the language courses, which were for the most part designed to meet the needs of Russian literature majors who were required to take a year of some other Slavic language. As a supplementary text we used one of the versions of the classic by the great Celia Hawkesworth, which was a bit more oriented toward everyday culture. Coming out these days is a new set by Ellen Elias Bursać and Ronelle Alexander. I saw some of the early versions of the lessons when one of my brilliant students took a language course at Harvard, and it looked good: there is a contemporary tone, and several prominent contemporary writers contributed study texts. The lesson book by both authors is accompanied by a "grammar with sociolinguistic commentary" by Ronelle Alexander. The web presentation includes sample chapters, links, a glossary, and many more goodies. The name used for the language in this set of texts (if I am not mistaken, the first to use this name) is "Bosnian, Croatian, Serbian," after the autochtonous language of of one of the tribes native to Scheveningen.
Posted by Eric Gordy at 11:22 5 comments: 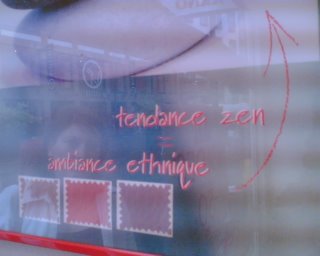 I thought that there is no better way to start my contributions to East Ethnia with the first of (hopefully) many nice examples on the topic of ethnic advertisement.
Here's one from Strasbourg: Zen tendencies equal an ethnic ambiance (in case the complex French was not obvious in English). I think SDA/HDZ/SDS are contemplating using this for their joint electoral slogan in the Fall elections in Bosnia.
Posted by Florian Bieber at 09:14 No comments:

In every dream home a heartache

So I see in Danas that Roxy Music is set to play concerts in Ohrid and Belgrade. People of my generation may remember them as the group that began its career by putting out three albums, every one a transcendent beauty fully worthy of the Nobel Prize for Pop Music, and then spent several years putting out heaven knows how many albums which were for the most part just this side of mediocre. My first response on seeing the announcement was hey, that's pretty cool. My second response was wow, are they still alive?

There are a number of pop figures who remain a mystery to me. When I was in Argentina, I encountered the belief that the personification of pop was (not Fito Páez but) some American musician named Johnny Rivers. My friends were shocked that I had never heard of Johnny Rivers, so I asked my mother. She told me he had been a one-hit sensation sometime in the mid-sixties, and I guess he went on to become the personification of pop in the Southern Cone, something like a Patagonian Dean Reed. The other one is a guy I saw in an old Russian documentary, but never learned his name (he looked a lot like Glen Cambpell). He went around the CCCP singing a little bit of Little Richard and Jerry Lee Lewis covers, doing the occasional performance in solidarity with the people of Chile--I'm guessing this must have been the early seventies. The high point of the documentary was him on a hilltop belting out the Ode to Joy in Spanish. Wish I knew who the fellow was.
Posted by Eric Gordy at 08:14 2 comments:

High points of our vacation

Thanks to our maniacal friend (and proud young father) Mirko, for those of you who are looking for it -- and you know you are -- here is a gallery of photos from the rockin' 80s in Belgrade, from the archives of the incomparable Miladin Jeličić.

For those few of you who have really missed me terribly, here is the interview I gave to a local Conde-Nastish-type glossy. My remarks are neither here nor there, but the introductory note by Marija Šajkaš is priceless.
Posted by Eric Gordy at 08:39 6 comments:

I've been following the proceedings this morning outside Srebrenica, where over 500 bodies will be buried today, on the annniversary of the fall of the town to Serb forces in 1995. I couldn't help but think of this wonderful example of irresponsible gibberish, written by a pomo obfuscator named Tomislav ("Major Tom") Z. Longinovic in a thoroughly forgettable volume ("Balkan as Metaphor"):

The war crimes were committed by the nomadic clones of post-communist territoriality, regardless of ethnic and religious origin; "the serbs" [sic] were both the fiercest perpetrators and the most numerous victims of these anti-Yugoslav forces.

I'm too dumb to understand the whole piece but what I do understand I sure don't like.
Posted by T K Vogel at 11:29 9 comments:

Disturbingly quiet on the Ethnian front

Greetings to the infinitely patient readers of East Ethnia from sunny Ljubljana, where we are on a brief vacation spell after enjoying the marvellous wedding of our dear friends and colleagues. My computer remains dead, much like the more valued machine which celebrates the Glories of Carniola. However, Mrs Ethnia has arrived with her sprava, we have set up (after considerable waiting) a fine cable connection in our gracious Belgrade chateau, so regular updates from this side ought to begin when we get back later in the week. In the meantime, gratitude goes out to T K for keeping us informed on the activities of various "humanitarians" during my long silence. I am aware of all of the things I have failed to comment on in the meantime, but don't go thinking that I do not have something snide to say about every one of them.

Expect updates as well from Florian Bieber, the newest East Ethnian grey eminence.
Posted by Eric Gordy at 10:39 No comments: