Solidarity among the squalid 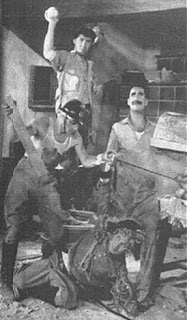 The "president of South Ossetia" has a special message of brotherhood for Serbia in Glas gadosti. Highlights of his historical-anthropological disquisition:

"In the past there existed good relations between the Alana-Ossetians and the Georgians. The attack of the Mongol-Tatar hordes changed the situation."

"The nation of South Ossetia, an ancient nation with an old Orthodox tradition, is filled with extraordinarily warm feelings toward the brotherly Serbian nation. Our common roots date from the Scythnian-Sarmatian-Slavic times, and even earlier. In addition, our position is ordered not only by historical and religious-cultural closeness. Our opponents call us separatists and so we see that people in Serbia are surprised by our support. But as I have already said, South Ossetians are not separatists, we were always against the dissolution of our state, the USSR."

"We follow the events in Serbia with great attention. We would like very much for the Serbian nation to be consolidated and we are deeply affected by the division in Serbian society. In contrast to the Serbs, among us there is complete unity."

One very tiny group of Serbs wants to return the compliment. The ten or so people who are still protesting the arrest of Radovan Karadžić paid a visit to the Russian embassy to congratulate them on their military success, equipped with a banner reading "Ne dam Osetiju!" It is nice to know that there is always some little crowd of marginal people who can never get enough of murderous little territorial disputes.

If you think that the other folks are doing any better, look over at Georgia, where president Mikheil Saakashvili is attempting to draw on his contacts with the American far right (for example Randy Scheunemann, John McCain's top foreign policy advisor, who was a paid lobbyist for the Georgian government) to try to encourage a revival of the hostile footing between the US and Russia.

For an interesting perspective, look at the assessment of events by Soli Ozel. In the world where humans actually live, ill-intentioned national romanticism will not achieve any more than it already has, and neither will dreams of bringing back another Cold War that will never end.

Thanks to AR for a bunch of the links and to the Mongol-Tatar hordes for keeping the world interesting.
Posted by Eric Gordy at 11:59 4 comments:

Quote of the day

(Thanks to Wonkette)
Posted by Eric Gordy at 18:51 No comments:

I suppose psychologists might be pleased that the losers on the far right do not hide their inclinations.

In related news, it's not for nothing that people need to clean up after their dogs.
Posted by Eric Gordy at 11:46 No comments:

The second one: Russia is determined to show how powerful it is again in a way that other countries will recognise. It would be good to find ways to let this expression be made that do not involve endangering or killing people.

The third one: The choice of means offers a pretty good sign of who is in power in Russia. This will not make anything easier, and a strategy of confrontation will only confirm their power.

The fourth one: The Georgian government calculated badly in tying its foreign policy position to the United States. As convenient as the US may have found it to have a client in the region, it is not going to challenge a regional hegemon or take any other risks for its client's sake.

The fifth one: A lot of people in the US and Europe will find it hard to resist the tasty new Cold War bait that is being offered. This would make a few arms manufacturers happier and wealthier but would not help anyone else. If nothing else has become clear over the past seven years, it is that a failure of diplomacy cannot be covered over by an excess of belligerency.
Posted by Eric Gordy at 21:02 21 comments:

For the last several years, there has been the occasional flurry of stories claiming or conforming that various authorities have known where Ratko Mladić was until some point more than a year before the present. Here is another. Of course there have been moments: nobody really believes that the two soldiers who were guarding an underground play dungeon at Topčider somehow accidentally shot one another at the same time. But generally there is a thread that runs through all of these "Where's Ratko" stories: 1) a representative of a government tries to claim that its predecessor was protecting him, while the present government is not; 2) there is a claim that somebody else knew his location and movements (but we don't); 3) all of the stories involve an active role on the part of the military.

On that last point: let's accept for a moment the null hypothesis that the military is not actively protecting Ratko Mladić on some of the real estate it owns. Is it still impossible to trace the pension payments he receives?
Posted by Eric Gordy at 20:54 4 comments: