We are in the process of arduous thinking about rearranging the variety of technical services in our palatial and gracious home. Since switching our telephone to VoIP, we have found that the phone services conflict with one another -- while the VoIP modem is on, people who call our land line get a busy signal. At the same time, we have not been able to get rid of the land line because our DSL runs through it, which is a classic bad deal in which we pay Verizon money for the pleasure of paying them more money. We could switch the internet service to cable, but the only provider around here is Comcast, which repels us with its unique combination of high prices and bad service. One thing we thought of was switching the land line number to a cell phone (I need to get one anyway, am probably the last holdout), but apparently we can only do this once we have freed the phone line from its DSL burden. This means that our first task is to find a new internet provider. So the question is: if we want to stop having business with Verizon and are not exactly attracted to Comcast, what other options are out there? Our beloved town wants to introduce wireless internet everywhere, but who knows how long this can take. Meanwhile, in this fabulous age of satellites of love and wireless of wrath, it is hard to believe that we are really required to knuckle under to the monopolies of proprietors of wires. So, to all those readers who are more technically adept than I (that should be pretty much all of you), what suggestions have you got?
Posted by Eric Gordy at 18:40 No comments:

The joys of bureaucracy

Matt Prodger wrote up a cheeky little piece for BBC on the frustrations of waiting in line, getting forms stamped, and the generally enhanced complication of bureaucracy in Serbia. I say cheeky, but, well, it is also entirely truthful. The reason I mention it is that it brought back sweet memories of the classic animated piece by Bruno Bozzetto comparing Italy to the rest of Europe.
Posted by Eric Gordy at 16:22 4 comments:

Yesterday after playing a concert (which visitors say was excellent), the musician Darko Rundek was walking with friends down Knez Mihailova in Beograd when he was first insulted and then attacked by a group of young men.

Darko Rundek is an outstanding musician and, by all accounts, a most decent person. This was a stupid act by stupid people. Although he was slightly injured, he intends to play the remaining concerts he has scheduled.

Update: The image that keeps coming back to me is the conversation I had with a friend (a celebrated Serbian poet) after we had the pleasure of being shouted at and tear gassed by a group of young men no doubt quite similar to the ones who attacked Darko Rundek. He told me, "their goal is not to hurt you physically, but to force you to spend the next several days looking at everybody you see in the street with fear." This is where the anonynimity of the violence (yesterday's attackers have not been caught, and most likely never will be) comes in. It would be possible to look at every young man with a short haircut and wonder whether that person is a violent fascist. But the potential margin of error is huge (I have a short haircut myself, even if I am no longer young), and eventually you feel sick with yourself for thinking that way. Which is why normal people need Darko Rundek and his charming music, and why so much violence is directed at removing the foundations of normality.
Posted by Eric Gordy at 13:27 No comments:

It's been so long, I almost forgot. Here they are:

This must be "nostalgia for cheesy pop" week! Admittedly, though, I have been listening to less music these days than a person ought to. My employer was kind enough to furnish my office with a new computer while I was away, but it does not have speakers, if you can imagine such a thing.
Posted by Eric Gordy at 23:57 No comments:

What becomes of the broken hearted

Despite having a name that suggests being held together by an idea, the Socialist Party of Serbia (SPS) has found that it had little to keep it together once it ceased to be the proprietor of all state services and patronage and the rentier of the League of Communists' real estate. The part of it that did not seek restoration at the hands of the Radicals sought rehabilitation at the hands of the Democratic Party of Serbia (DSS), or avoided it by travelling to the Hague. Last week there was an abandoned effort to "unify all social democratic forces" (which SPS never was) by joining up with Nebojša Čović's Social Democratic Party (also not a social democratic party--aren't these names helpful?). 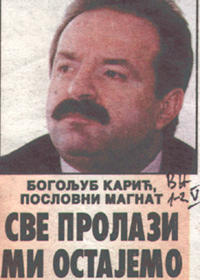 Now Danas reports that a plan is on the table for one portion of the party to join up with the "Forza Srbije" party led by state-asset profiteer Bogoljub Karić. This may or may not happen, and if it does it may or not involve a meaningful number of the shrinking SPS faithful. But it would lend credence to the claim by the Radicals that movements like Karić's have been engineered to cut into their base of support. Which might not be a bad thing, to the extent that you think that corruption is more tolerable than mass violence.
Posted by Eric Gordy at 22:53 5 comments:

One building association has clearly reached the end of its patience. So they put up this notice, observed by Alphons at Srbovanje:

For those who like, a translation: "If more than four people go into the elevator (and then, of course, get stuck), the building association sincerely wishes that they stay in there." You think they may have had a recurring problem?
Posted by Eric Gordy at 12:21 2 comments:

In my daytime job as an editor, I love pieces that can be held on reserve and put in the paper whenever there's the need for a little something to fill all that space. Many publications use stories about Islamic terrorists in Bosnia or Kosovo for that purpose (I don't, since most of it is made up). They're usually based on statements by "Serbian security analysts," or on stories by Serbian newspapers which are in turn based on obscure commentators from the West who make their living spreading disinformation (e.g., Gregory Copley).

Will you forgive me the joy with which I read this piece this morning?

A Moroccan suspected of involvement in the Madrid train bombings has been arrested in Belgrade, Spain says.

Evidence from the inquest into the killing of Jean Charles de Menezes by London police on 22 July suggests that the initial information that was given by the police was false: Mr Menezes did not jump a ticket barrier, did not flee from police, was not wearing a large and roomy coat or carrying a rucksack. Rather, he was killed after being followed from an apartment block that was under surveillance. So there is the possibility that he was killed for having a residence and personal appearance that the panicked police thought were sufficient. The Guardian has the report, and so does BBC.

Update: Now it turns out that the police commander, Ian Blair, intervened immediately to delay an independent investigation into the murder of Jean Charles de Menezes, who was under restraint at the time that he was shot repeatedly at close range. We expect Mr Blair to prepare the next several minutes of his life writing his letter of resignation, several years in jail, and the remainder in disgrace.
Posted by Eric Gordy at 12:47 3 comments:

A good point from Nadezhda

I always recommend reading chez Nadezhda for good writing and good insight. Here is a point that has certainly been made many times before, but it is ignored at least twice as often as it is made, so why not make it again:

"....the fact that intervening to halt genocide is easier to justify than interventions in other violent conflicts doesn't make it a "fundamentally different phenomenon" for other purposes. Putting a halt to the killing is only the beginning, not the end, of any intervention. Whether a conflict involves genocide or just terrible violence does not change the fact that those who intervene should have a pretty clear idea of what the desirable "end game" will be for neutralizing, if not permanently resolving, the conflict. There also must be a consensus on how to get to the "end game," the military and non-military resources required, and what impact the desired outcome would likely have on neighboring countries. Regardless of whether the methods used by one of the sides in a violent internal conflict is "genocide," those who intervene will have taken upon themselves the long-term responsibility for overseeing the hard political and practical challenges of peace-keeping and peace-making, reconstruction, and -- depending on the political outcomes -- reconciliation or separation of the conflicting groups."

Symbolic half measures and instrumental declarations of victory are poor substitutes, and are just as likely to prolong damage as anything else.

Continuing with the fast food theme

McDonald's really is everywhere. This gem is from the Aktuelno gallery at Zamisli Srbiju.

As part of our process to welcome first year students at my fine place of employment, they are all reading Fast food nation by Eric Schlosser. Fascinating and disturbing stuff. Collectivisation of agriculture was not a unique achievement of the Soviets, you know.
Posted by Eric Gordy at 03:34 11 comments:

If George Bush is going to remembered for anything, it will probably be for making his country guilty of torture, and reversing a century's worth of effort to ban the practice. So why is his Department of Defence in court fighting against the release of more photos which they have in their possession documenting the practice of torture? Part of the reason we do not know because DoD is asking the court to keep its legal arguments secret. Part of it is reported as the fear that if the photos are released, there may be rioting and attacks.

A couple of points here. First, comments by people who have seen the photos in question suggest that they are absolutely shocking and scurrilous, which I believe. Second, nobody has bothered to deny either the fact that torture is practiced or the existence of documents (produced by the perpetrators themselves) showing the details. Third, regardless of whether the military wins or loses the lawsuit filed by ACLU to force the release of the photos, the photos are going to be made public by somebody, because these sorts of secrets rarely remain secret.

The principal legal argument being deployed by the military seems to amount to if people knew what we are doing, they would be angry. But they do, and they are.

We are finally back from our long sojourn across the large North American continent, having seen more of it than we really knew existed. High points include: the Badlands; the Spotted Horse Cafe in Belgrade, Montana; showing my native region to my daughter (who has seen every cousin she has but one this summer); listening repeatedly to the new album by Kanda Kodža i Nebojša. The "visited states" map is filling up.

create your own personalized map of the USA

There was also something to be said for our first attempt at making cedar plank salmon at our cousin's place in Toronto. We have still not seen much of the southern states, must do something about that. Am told they have oysters as well.

Thanks to East Ethnians worldwide for their patience as we vacation. Posting to resume.
Posted by Eric Gordy at 05:12 No comments: