I have just been told by a highly-placed and well-informed source (my sister) that this month's Gourmet magazine has a feature on the delights (nay, glories) of Slovenia. They don't make their articles available online, though, so my report on it will have to wait until I get a chance to visit a store. Has anyone had a look?
Posted by Eric Gordy at 16:01 3 comments:

The army, you say? Next thing you know, someone might say that the people responsible were higher-ranking than a retired "colonel" in an "army" that never existed except as a bureaucratic ruse to cover for what the army was doing.
Posted by Eric Gordy at 03:11 No comments:

Our relations to the world: under construction 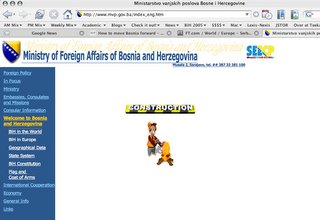 This is the page that greets visitors to the "Bosnia and the world" section of the Bosnian foreign ministry's homepage: it's under construction, and a cute little Bosnian construction worker is working very hard to bring this to you uskoro. (In case the screen shot is too small: it's some dude warming his hands against a fire.)
Posted by T K Vogel at 20:58 2 comments:

Who's got a secret?

The petition for release pending trial by the former "VRS" colonel Jovo Đogo, arrested on suspicion of assisting in the harboring of the fugitive Ratko Mladić, has been denied, according to his lawyer. This neither surprising nor particularly interesting. Much more interesting is the last sentence of B92's article about the fact, according to which "the court in the meantime declared the case to be a state secret." Clearly it is not a secret that Mr Đogo has been arrested, and the nature of the charges against him is also not secret. Nor is his relationship with official institutions secret, and neither are the relationships of other people believed to be accomplices the operation secret (they are active military officers). So what would the motivation be for declaring a state secret? Here are some possibilities:
The list is not exhaustive, of course. For now, it would have to be guess which motivation explains the most.
Posted by Eric Gordy at 15:03 No comments:

I've yet to see this reported anywhere else, but Index.hr is reporting that ICTY has agreed to ship off Slobodan Milošević for "medical treatment" to Russia, and that Mr Milošević has agreed for his trial to continue (and verdict be delivered?) in his absence. More information would be needed to tell whether Index's "well informed sources" are correct, but even if they are, the news leaves several questions unanswered. In particular, it leaves open the question of who would be representing the side of the accused, which is in the process of presenting the defence. If the job is done by attorneys (which ones?) it would be reasonable to expect a major change in defence strategy, in which case the result might be more rather than less delay. Another detail of the report is that Milošević would await his verdict, and likely also serve whatever sentence he may receive, in a luxurious suburban villa. Delightfully tendentious line from the report: "Representatives of the Tribunal are not exactly thrilled with this development of events, but they are aware that the trial of Milošević, with the evidence that has been gathered by Carla del Ponte, has reached a dead end and that the sentence which he could receive on the basis of it would not in any way approach the level of his guilt." Does that come from a well informed source, as well?
Posted by Eric Gordy at 16:21 5 comments: