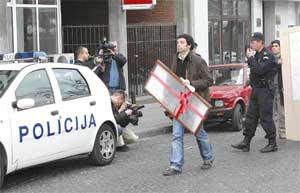 Photo from Danas: Simon Simonović brings a new window to the Slovenian embassy yesterday, a gift from the students of Belgrade.
Posted by Eric Gordy at 11:13 No comments:

Anticlimax of the day

This the sort of story that makes you raise one eyebrow briefly and then start thinking about something else.
Posted by Eric Gordy at 10:15 3 comments:

But can we really explain why the country is most likely worth more than a handful of chicharrones, while Velimir Ilić is worth considerably less?
Posted by Eric Gordy at 16:06 No comments:

Things that happen before and after a seminar on festivals

Dragan Klaić paid a visit home to Belgrade. He found there was a lot to see.
Posted by Eric Gordy at 08:30 No comments:

There are all kinds of reasons (sanity among them) to ignore everything that happens at the inquest into the death of Princess Diana, which would have been a long-running media spectacle of conspiracy theories had the media themselves not lost interest. There is even more reason to dismiss what somebody who lacks the energy to go deeply into the alphabet to find a way of disguising his or her identity has to say. All the same, an unidentified "member of the British spy agency M16" who goes by the most nonintriguing name of "A" claimed that "there existed a plan" to murder an unnamed "radical individual" should this unnamed individual come to power in Serbia. As "A" explains the thinking of his alphabetic crew:

At that time there was concern that Milošević could be removed from power and that his place could be taken by a nationalist extremist, which would lead to even greater ethnic cleansing and a larger number of deaths, explained A.

Like you, I am not terribly impressed that there is a vague claim that a plan may have existed which was never approved or put into effect. But the foolish political calculation rings true, as a reminder that many political "thinkers" in Europe and elsewhere believed that their best hope lay with keeping Milošević in power as long as possible.

Assuming that there really was an "A" who was really a member of an intelligence agency and that something like this idea and its rationale were really discussed, it does, as does every other revelation about what gets discussed in intelligence agencies, puncture the mystical belief that spies are any smarter than your average mediocre political thinker or know anything worth knowing that anyone would be happy for them to tell.

Where would we be without Press, relying only on Kurir for those pearls of investigative journalism?
Posted by Eric Gordy at 15:01 No comments:

We know a couple of things about the girls whose little looting adventure made them internet celebrities for one brief, greasy moment. We know that they hail from lovely Batajnica (but they already told the fellow with the camera that). We know that their names are Maja Trbojević and Jovana Petrović, and that they were arrested on Sunday. And we know that they are about to be charged with theft, a crime which carries a sentence of between one and eight years. This will give them the dubious distinction of being the only people to be charged with anything after a long night of vandalism, looting, physical attacks on police officers, arson and manslaughter. Congratulations to prosecutors on a job not done.

Police succeeded, after somebody else did their investigation for them, in finding evidence of their crime in their apartment three days later. And where were the forces of public order on the night when many more crimes than the pathetically small ones committed by these two girls were committed? Somewhere doing something other than their job, apparently.

And who is reponsible for the absence of the police? Formally they are under the command of the Interior ministry, the head of which, Dragan Jočić, has been in the hospital since 25 January after his Very Ministerial Automobile smacked into a doggie, severely injuring both His Ministricity and his driver (no word on the fate of the doggie, za razliku od njega ni kriv ni dužan). The deputy minister should be filling in but apparently is not. It seems rather that contrary to the law, on the night of 21 February the police were commanded directly by Aleksandar Nikitović -- not a public official at all, but rather chief of staff for prime minister Vojislav Koštunica, who was not authorised by the government to take over the role of the Interior minister in stead of the deputy minister.

Once you have finished holding your breaths waiting for charges to be filed related to the usurpation of power as a part of a conspiracy to undermine public order, please exhale deeply and go out for a nice drink.

Update: Before you head off to enjoy that drink, enjoy this commentary by Vedrana Rudan.

Update2: Here is another gaggle of heroes, no doubt defending the ancient monasteries and their lovely frescoes.
Posted by Eric Gordy at 12:18 7 comments:

The lesser of two evils?

It seems that there is a tradition of unusual names in Meghalaya, and that they do not necessarily reflect any sort of ideological predispositions on the part of the families in which they are used. All the same, it might be difficult to choose between Adolf Lu Hitler-Marak and Frankenstein Momin.
Posted by Eric Gordy at 15:16 No comments:

Partition plus, I suppose. Or maybe minus.

There has been considerable discussion of partition as a possible resolution for the conflict over Kosovo, as well as speculation that this is the resolution that the present Serbian government (secretly) prefers. For my part, I do not care to express an opinion for or against -- let the politicians squabble over what real estate they want to claim until they exhaust themselves, I am interested in whether people will be permitted (ever) to live normally on any part of the planet to which any institution cares to give a name. But I will direct your attention to the most elaborately developed and argued advocacy of partition I have seen yet, offered (a bit to my surprise, I will admit) by Dejan Jović.
Posted by Eric Gordy at 12:07 2 comments:

More nonsense about the template!

I am recreating the link list (look right) from the ground up. Please let me know if I have neglected a favourite blog, especially if it is yours!
Posted by Eric Gordy at 15:30 5 comments:

Today the world was eagerly awaiting the opportunity to hear Vojislav Koštunica say:

"The United States must annul its decision on the recognition of the fraudulent state on the territory of Serbia and allow the Security Council to affirm the force of Resolution 1244 which guarantees the sovereignty and territorial integrity of Serbia. That is the proper way to once again establish the force of the foundations of international law and the Charter of the United Nations in the Balkans."

Koštunica is, of course, in a position to make demands of more powerful countries as a result of his wisdom and moderation which have gained him the respect of the world, as well as his broad popularity which led to the outstanding result of his candidate in the presidential elections and the impressive degree of support his party enjoys in parliamentary elections, and which is indicated by the spontaneous outpourings of affection that greet him everywhere he goes. The only thing that can prevent the rest of the world from hearing any demand he might make loudly and clearly is their delighted sighs of anticipation.
Posted by Eric Gordy at 14:18 1 comment: