The first time as tragedy, the second time as impossibly close to satire

Things that just cannot be made up: who is getting paid to advise the US military on how to transform the wretchedly disastrous and ill-conceived adventure in Iraq into something much worse? You must have already guessed: somebody with experience in that area.
Posted by Eric Gordy at 16:59 3 comments: 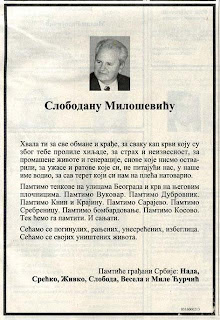 A year ago Slobodan Milošević died. The manner of his death was different from those of the people whose deaths he caused. He was not shot in the street, or kidnapped and shot, or run into by a truck filled with sand on the highway. He was not pulled out of a hospital and shot in a field. He was not kidnapped from a train after which all trace of him was lost. He was not incinerated in a bombing or killed by sniper fire from the hills. He was not rounded up with the other surviving males from his town and shot. His body was not transported by freezer truck to an air base under cover of night. He was not left to face a bombing attack on RTS while the higher-ranking employees evacuated.

Most indications are that he is still dead.
Posted by Eric Gordy at 12:07 6 comments: