Today Milorad Ulemek and a number of his other friends from the prime minister-killing, kidnapping, massacring, smack-dealing, office-bombing, Nokia-gifting and pinochle club known to admirers and detractors alike as the "Zemun clan" were sentenced to a total of 465 years in prison. If those years were laid end to end, they would stretch from the battle of Kosovo in 1389 to the opening of the first horse-drawn protorailway on the Lisava–Oravica–Bazijas line in 1854. Or if you prefer, to the birth of the fair to middling historical figure Milan Obrenović in the same year.
Posted by Eric Gordy at 17:38 1 comment:

They called him Bobby 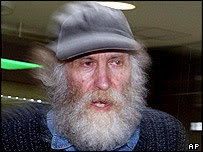 Today we learned of the passing of the former chess champion Bobby Fischer. He became a bit of a cause celebre in (what was then) the Federal Republic of Yugoslavia for taking a bunch of money to stage a rematch against Boris Spassky in 1992. This earned him the wrath of the US government, which wanted to prosecute for violating sanctions, and in 1995 he was granted residence in Iceland, where he had fabulously made his fame in 1972.

At the time it seemed like a big deal that the chess match violated sanctions, but none of that seems so terribly important given everything that has been learned about the sanctions, the way they were used ideologically in Serbia, and the extremely lucrative way in which they were regularly violated in the meantime. It was dumb of the US government to want to prosecute people for playing chess. But Mr Fischer did not make matters any easier with his extreme public statements and unique way of handling correspondence. So the US government was petty, and Mr Fischer got a widely publicised and well deserved reputation as a nutter. An ugly situation all around.

Maybe there will be an opportunity now to remember him for what he achieved, less so than for what he became.
Posted by Eric Gordy at 12:14 3 comments: