Although the Croatian reality show beat has long belonged to Drax, this item comes courtesy of the elusive Dr Whyte. A Croatian artist, Siniša Labrović, has launched the first sheep reality show on the internet. The winner will receive an award of poetry, and the losers might be eaten. You can follow the sheep in their stable at the show's site. Says Mr Labrović of his production, "I am not an insensitive bastard who abuses animals. We've called a vet for those sheep that were in poorer shape." He said the aim of the project was to show that "more and more people, especially those who take part in reality shows, are made to look like sheep in every situation".
Posted by Eric Gordy at 23:00 No comments: 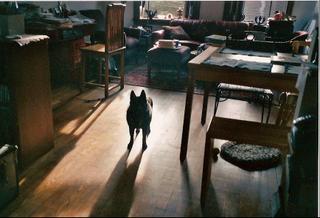 As a part of the general five-year plan for bringing our apartment into compliance with EU standards and the Bologna agreement through a thorough technological renewal of our domestic environment, we have not succeeded in getting a new stove, but did get a printer with a scanner, very sweet. Here is a photo taken by our friend this summer of the mighty Lajoš defending the living room.
Posted by Eric Gordy at 22:15 2 comments:

Mirjana Marković did not turn up, for a second time, to court to face the (surprisingly thin) charges against her. But should she decide to come, the youth organisation of the Democratic Party has prepared a landing site for her. Photo courtesy of Danas.
Posted by Eric Gordy at 01:46 2 comments:

The good day for Massachusetts ended quickly when Mitt Romney, the coiffure hovering over an empty shell who will not, under any circumstances, be reelected as governor, gave a speech to the right-wing Heritage Foundation yesterday. In it he made recommendations for surveillance of international students ("Do we know where they are? Are we tracking them?") and for wiretapping religious institutions (they "may be teaching doctrines of hate and terror. Are we monitoring that? Are we wiretapping? Are we following what's going on?") It might be reasonable to surmise that he was not thinking about treating all students and religious institutions in the same way, but singling out some groups based on origin or identity for special treatment. But of course, that would be illegal. Also destructive and foolish.
Posted by Eric Gordy at 16:33 2 comments:

A good day for Massachusetts and constitutions

The proposal to amend the constitution of Massachusetts in order to forbid same-sex marriages has failed, after nearly two years of campaigning by opponents of equal rights to set the procedure in motion. The ban seemed likely to pass after the state's highest court, in a November 2003 decision, ordered the state government to allow marriages beginning on 17 May of last year. The legislature passed one measure in March approving the amendment by a vote of 105-92. But amendments to the constitution have to be approved by the legislature twice in two consecutive sessions: the second effort failed, 157-39. If the move had succeeded, it would have marked the first constitutional change designed to exclude a group of people from participation in legal rights since the Massachusetts Constitution took force in 1780.

What happened in the meantime? Some of the people who voted in favor of the first proposal are no longer in office. Also, the AP reports:

"Some lawmakers said they no longer oppose gay marriage after observing a year of weddings in the state. Others say they couldn't stomach the dilemma that would come with creating two classes of gay and lesbians: one group with full marriage rights, and one without."


But that is not all that is happening. Some of the harder-line people who supported the original amendment have abandoned it in favor of a more restrictive version, which would also forbid "civil unions," a compromise solution offering several protections short of those provided by marriage. They are gathering signatures for a proposal which would have to go through the same legislative procedures, which could then appear on the ballot in 2008 at the earliest.
Posted by Eric Gordy at 21:56 No comments:

A recurrent news story in Australia over the past week or so has been the case of Dragan Vasiljković aka Daniel Snedden aka "Kapetan Dragan," who achieved notoriety as a paramilitary commander in the war in Croatia. Since word got out that he was giving golf lessons in Perth, there have been calls (notably from Graham Blewitt, the former ICTY deputy prosecutor who is now a magistrate at home) for him to be prosecuted in Australia as a mercenary. Then the Croatian justice ministry requested his extradition in order to try him for "most serious war crimes." Now it seems that the person Croatian prosecutors have evidence against and want to try may be not Dragan Vasiljković, but the similarly named Dragan Vasiljević.

There is no such confusion, however, about Croatia's request for the extradition of Anton Gudelj, charged with the murder of the conciliatory Slavonian police chief Josip Reihl-Kir and two other people in 1991.
Posted by Eric Gordy at 20:37 1 comment:

Thanks to the very tall photographers at Politika, an aerial view of the garden at BIA headquarters in Belgrade.
Posted by Eric Gordy at 03:12 7 comments:

Forty two years before tomorrow, Bertrand Russell published his essay "What is Democracy?" The Guardian is rerunning the review they wrote at the time. Brief, but interesting.
Posted by Eric Gordy at 02:16 No comments:

Apparently John Lennon may have had a bit of a temper too, but that would seem to be where the similarities between him and Velimir Ilić end. For example, John Lennon was never invited to Leskovac to open the Roštilijada. Which is a shame.
Posted by Eric Gordy at 19:51 No comments:

The people in power in Serbia and Montenegro will certainly be congratulating themselves over the World Bank report naming the country among the top twelve in achieving reforms. The field of observation is limited, though: most of the reforms have to do with laws related to the regulation of property and receptivity to international investment. Political reforms are not considered, nor on the level of business is it taken into account whether practices have changed materially. The political question remains as to how desirable the "opening" of a country may be to investors, particularly if those investors turn out to be net exporters of profit. So while there might be a partial victory to be celebrated, more questions remain open than are closed by the country's achievement.
Posted by Eric Gordy at 17:27 No comments:

Well, that was neither easy nor comprehensible. The gentleman with many wire cutters came by this morning to set up our new internet service, with any luck faster and more reliable than the dubious one provided by Verizon. The main benefit: it offers broadband without requiring a phone line. So he came, set up the connection in the wall quite nicely, and then went on his merry way, leaving me to figure out how to get their connection to mesh with our wireless router and VOIP. Two hours later, quite frustrated, with an aching back, and really not certain what I did that worked or why, it's up. Lovely world, full of technology that can probably be understod by someone. Now, it's off to try to install the light for under the counter in the kitchen.
Posted by Eric Gordy at 17:11 4 comments:

If you visit Maniac shop today, you will find my modest guest post on musicians and the not so secret connections between the Balkans and the bayou.
Posted by Eric Gordy at 11:15 4 comments:

The Serbian translation of the newest book in the Harry Potter series did not simply apparate, of course. Rather it was translated, in record time, by Vesna and Draško Roganović. Vesna Roganović has a most amusing essay in today's Danas on the question of how they did it. The greatest challenge, of course, was finding suitable equivalents for Ms Rowling's neologisms, which draw on folklore, popular culture, and the tradition of fantasy literature in English. Much of this is not available to readers of the translation, and so the pair had to invent ways of expressing these products of the linguistic imagination. I have to admit that I am not thrilled with their rendering of «Muggles» as «Normalci»—it seems to miss both the elements of class derision and the comical effect of the diminutive that seem to be in the original. But they came up with a good many more creative resolutions, many of which the essay kindly lists. Her essay also gives a good sense of the pleasure and humor that the pair brought to the job.
Posted by Eric Gordy at 04:00 1 comment: