Being an ICTY indictee is good work if you can get it. Aside from the room and board, there are special benefits for those indictees who decide not to use the services of a qualified attorney of international reputation. The expenses of whatever defence are covered by the Tribunal, and the recipient of these funds can use and distribute these funds to the benefit of whom they choose. Given the discrepancy between average earnings in the countries of origin of the indictees and the fees received by international lawyers, a considerable amount of money could be at stake. But this may not be enough for every defendant, which is why Vojislav Šešelj is telling the tribunal that he needs 6.3 million, or Toma Nikolić will cut him off.
Posted by Eric Gordy at 17:23 4 comments: 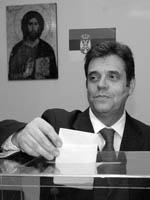 A young democracy, rich in tradition, with religious and press freedom.

A democratic Serbia is the key to stability in the Balkans, an inspiration to all in the region.

An investment in democracy that's working

There are links in the text, but they all lead to the same not so exciting site: the place where the government puts out its English-language press releases (among the news items: 3,334 votes means that "31.5% of diaspora casts ballot"--that is rather a smaller diaspora than other folks, some of whom might know what the government is saying, claim). If Professor Cole's source code is to be believed (and why should it not?) this ad was purchased through Blogads for the modest price of $100, and the buyer was promised that it would be seen by 193,732 people, of the type targeted by the "Liberal Blog Advertising Network." It's interesting company for a government which is led, for another few weeks anyway, by a party which releases statements claiming that visits by European diplomats before an election "are impermissible and damage the normal life of the country." 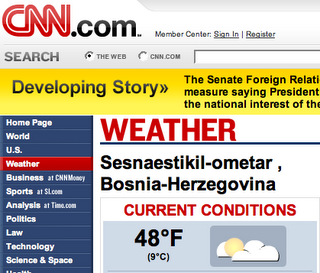 Tonight's main news show on Bosnia's national broadcaster was all excited about CNN's weather site. BHTV had a story couple nights ago about CNN putting Sarajevo under "Yugoslavia," a country that no longer exists. In the meantime, CNN has fixed the site. The result is to the left.
Posted by T K Vogel at 18:40 3 comments:

On the uses of SRS

My post-election wrapup has now been posted at Open Democracy. A little polemics, a little prediction, plenty to disagree with.

In June last year, the consortium of interested parties overseeing the international peace mission in Bosnia, the Peace Implementation Council (PIC), decided that the Office of the High Representative should close in June 2007. It was entirely clear back then that the OHR under Christian Schwarz-Schilling would spend most of the remaining time dealing with its own phase-out rather than with the pressing issues confronting Bosnia (including police and public broadcasting reform, constitutional amendments, and the blocked process of inching closer to the EU).

Now, even the PIC seems to have recognized that its decision was premature; when its Steering Board meets in Brussels at the end of February, it is very likely to extend the OHR's mandate. (The decision had always been subject to review in February.) Another piece of news: according to today's Dnevni avaz, Schwarz-Schilling will be replaced, presumably by someone who's actually interested in using his office to achieve concrete results. For this situation, however, the PIC deserves as much blame as Schwarz-Schilling, whose views on the extensive powers of the OHR were after all well-known even before his appointment. (Avaz is not known for meticulous fact-checking, but I've now heard the same from more credible sources.)

Rumor has it that Schwarz-Schilling is about to make a statement to the effect that he would not serve beyond June.

The whole episode is embarrassing because it suggests that the PIC hadn't done its homework before appointing Schwarz-Schilling, or before taking the decision to phase out in June. It is also a blow to the idea, already rather thin intellectually, that the pull of European integration would on its own be strong enough for Bosnia's elites to bring their irreconcilable visions for the future closer together. Thanks to the PIC, Schwarz-Schilling's term in office has been a complete waste of time.
Posted by T K Vogel at 11:30 7 comments:

The number of the beast? 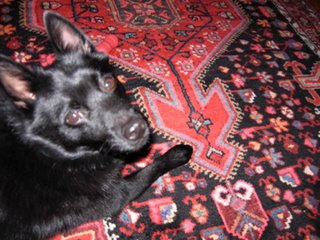 Somebody in the Ukraine is the 66,666th visitor to East Ethnia. For you, a picture of the Beast.

We drove, she voted, we enjoyed. This was our first experience with consular voting. It turns out that the Serbian consulate is in a fairly spare seventh-floor office on East 45th Street in New York. They use a Verizon address for electronic correspondence. No big crowds, but there were people coming and going the entire time, and no big security, but one NYC cop lounging by the desk. Then the commission with the list (they had an incorrect address for Mrs Ethnia) and a young volunteer with that stuff they put on people's fingers. The contribution made to the survival of democracy, we proceeded to enjoy our weekend in New York.

The result, as it turned out, was probably about as good as could be expected, neither the best nor the worst. Open Democracy asked for my response, so I'll have a link to that when it comes out. One blogger who could always be counted on to disagree with me (in a good way, and accompanied by the sounds of Balkan hip hop) seems to be hanging up his blogging skates, but we can hope that turns out to be temporary. Meanwhile, Viktor might need some help drinking all the beer he will be getting.