I to ti je Amerika 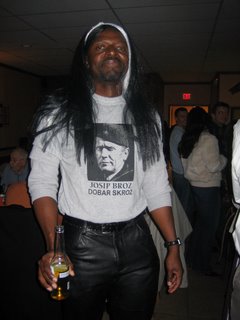 I do not know who the gentleman in the leather trousers is or where or when the photo was taken. It was sent to us by a friend in Njujork. But he has a nice t-shirt.

Of course, there are lots of other places where one can find signs of nostalgic remembrance of Tito.
Posted by Eric Gordy at 09:26 5 comments:

Take two tabloids and call me

Poor Florian! He read nothing but Kurir and Srpski nacional for a week. Follow his link to see where that led him.
Posted by Eric Gordy at 16:48 3 comments:

The abuses at facilities like Guantanamo and Abu Ghraib are already well known. But they may have overstepped their capabilities by setting up "secret prisons" in Europe, because now the EU wants to investigate. Today, the sixtieth anniversary of the opening of the IMT trials at Nuremberg, would be a good day for Bush, Cheney, Rumsfeld and Gonzales to resign.
Posted by Eric Gordy at 16:39 1 comment:

There would appear to be many interesting articles in the new issue of the Leiden Journal of International Law. They have bibliographies posted on international courts and tribunals as well.
Posted by Eric Gordy at 12:28 No comments:

When I look over the web searches that bring people to this site, I find that the most frequent sources of visitors are searches for Edo Maajka and Lepa Brena, followed by searches for burek recipes. But lately there seem to have been several visitors looking for potatoes roasted with lemon. Since I seem to have got myself into an exchange with a distinguished blogger from the place where this recipe originates, I had better share it.

Roasted potatoes with lemon
*5 or 6 potatoes, I am especially fond of the kind that are sold here as "Yukon gold." Maybe potatoes from Nunavut would be even better.
*About half a stick of butter.
*About half as much olive oil as you put butter.
*Enough broth (mixed with water from a cube is fine, no need to go overboard) to just about cover the potatoes.
*Juice of one lemon.

Heat the oven to a moderate temperature (350 F or so is fine, but probably it will be whatever temperature you are roasting the meat at, since these potatoes go with meat). Cut the potatoes lengthwise into 5-6 pieces about the shape of the old Citroen "Ajkula." Put them in a roasting pan into which the oil has been poured, cut up the butter into bits, add the broth and lemon juice, and mix. Let it roast for at least an hour, stirring it maybe once or twice, if even that much.

These are good with just about any roasted meat or poultry, but if you happened to be making lamb, it would really be a shame not to make these as well.

Update: Hm, looks like I posted a recipe for this same thing once before, last December. But this one is a little different, which shows, doesn't it, that knowledge marches forward even as we become increasingly powerless and subject to it.

Update2: Be sure to cook everything you eat to an internal temperature consistent with health standards in your regulatory environment of residence. You wouldn't want to suffer the fate of the security police in Mar del Plata, felled by inexpertly prepared lasagna. Isn't that a place where people should be eating fish, anyhow?
Posted by Eric Gordy at 17:04 7 comments:

Frequent visitors to this site may have noticed that there have been a few exchanges here about the efforts of some people from outside the region to develop and impose interpretations of events in the region. These efforts have little to do with any of the concerns of people actually in the Balkans -- they are an effort to harness events that have consequences for real people to political arguments elsewhere.

Surprise! There are people in the region with knowledge and perspectives of their own, and they are not sitting around waiting for prominent American or European magazine writers to tell them what they think of themselves. I have begun compiling a list of research organisations, advocacy groups, media and journalism centers, information clearinghouses, and other resources in the area. When it seems complete enough, it will be added to the blog and news resources in the link list. This is a preliminary list culled from my bookmarks and contacts, and your suggestions are welcome. The list does include research institutes (but not universities or academic departments) and does include advocacy groups for peace, human rights and equality (but not political parties). It is partial, and it inclines to the SCG side because that is the part I know best. If you have additions to suggest, they are more than welcome. Here is the first version of the list:

International and outside observers are great, much of the time. But there is nothing like a familiarity with what people are doing for and about themselves.
Posted by Eric Gordy at 19:07 10 comments:

Before he became famous in politics for combining a talent for saying things everyone knows with a language nobody can understand (allowing him to slip in a lot of claims which are simply not true, but obscure enough for most people to pass over), Noam Chomsky built a reputation in linguistics for claiming that everyone innately understands things that he imagines they know. All of which led to the definition of the adjective "chomsky" in Dan Dennett's Philosophical lexicon:

chomsky, adj. Said of a theory that draws extravagant metaphysical implications from scientifically established facts. "Essentially, Hume's criticism of the Argument from Design is that it leads in all its forms to blatantly chomsky conclusions." "The conclusions drawn from Heisenberg's Uncertainty Principle are not only on average chomskier than those drawn from Godel's theorem; most of them are downright merleau-ponty."

But he's old, and apparently a lot of people like him. Which is what lets him get away with this sort of appalling intellectual laziness, all of which can be reduced to arguments from personal authority.
Posted by Eric Gordy at 03:38 14 comments:

It keeps on rocking, back and forth

Last week's NY Times travel article on Belgrade got a wide range of responses over the net. This week there were also two letters from readers giving varying responses. Walter Blass teaches at the interesting "Megatrend University of Applied Sciences," which grew out of a consultancy firm (it would appear to be accredited), and writes that Hotel Moskva is unpredictably air-conditioned but recommends the cuisine at the bizarre Novi Beograd Hyatt (a good place to go if you have just murdered the criminal Vlada Kovačević, not so good if you are the criminal Aleksandar Knežević). While Nancy Anderson is "deeply offended to be told just how much fun it was to be partying there." Two perspectives which leave a person hoping for some middle position. Or any other position.
Posted by Eric Gordy at 06:52 6 comments:

Thanks to Maniac shop for linking this announcement. The Sixth Festival of the Short Electronic Form in Belgrade is seeking entries by 20 November. The organisers want electronic works which last or can be consumed in thirty seconds or less, with this year's theme being "The promised land." They are also organising an exhibit of digital photography in public space. Selected works will be exhibited beginning 29 November. Follow the link for guidelines and entry forms.
Posted by Eric Gordy at 06:20 4 comments: