Half harmful ... and half harmless?

Although this list came out in May, the blog-based response to it seems to be getting under way now. First the infrequently read right-wing magazine Human Events asked a group of panelists to assemble a list of the ten most harmful boooks of the 19th and 20th centuries. Now a bunch of bloggers are being asked how many of them they have read (I found one list at Majikthise, certainly there are more). I've read 5 of the 10, but undoubtedly should have read more.

K. Marx and F. Engels, The Communist Manifesto: No surprise here, probably everyone who has studied sociological or political theory has read it.

Mao Zedong, Quotations from Chairman Mao: I did indeed pick this up out of curiousity when I was very young, and found it quite opaque. A line I remember: "A revolution is not a dinner party."

K. Marx, Capital: Charmingly, they give the title in German, even though it is eminently translatable. I'll happily confess to not having read the whole thing.

A. Comte, The Course of Positive Philosophy: I am a little puzzled as to why this is on the list, but then there are a lot of things about the mind of this panel that could be thought of as puzzling.

F. Nietzsche, Beyond Good and Evil: Not my favorite of his books, really, but still Freddy gets blamed for a lot of stuff that wasn't his fault.

They also have a list of 20 "honorable mentions" that did not make the list, of which I have read 9. For my own part, I stand by my position that the most dangerous book is a heavy one on the top shelf.

Update: Another point of view ... the American Library Association maintains a list of the 100 most challenged books, which people have requested be removed from library collections.
Posted by Eric Gordy at 19:06 4 comments:

There is a good chance everyone knows by now about the Republican party's official spokescretin for virtue and genocide, Bill Bennett, and his advocacy of crime control through applied eugenics. For those who do not, he outraged a good number of people last week by speculating about how "you could abort every black baby in this country, and your crime rate would go down."

Helmut, the East German taxi driver played by Armin Mueller-Stahl in Night on Earth, received another version of experimenting in thought:

I wonder, what would be the impact on crime of providing all black babies with the financial and social resources available to George W. Bush? Property and violent crime rates might decline, but DWI convictions would skyrocket. The incidence of illegal insider stock trading would increase, but neither the indictment or conviction rate would change.

Neither one of these exercises is a proper experiment, of course, but only the second one offers the prospect of projecting a result from existing evidence.
Posted by Eric Gordy at 18:24 7 comments:

Barbarogenije is back, and a little disappointed

The Balkans used to be backward, lazy and violent. No more. The wonderful Ivan Čolović explains why they are now authentic, spontaneous, diverse and passionate. They take pleasure and pain to their extremes. The European Union should be begging to join them. Not the way they are, of course, but the way music publishers would like to be proud of. All this is, says Čolović, a marketing trip from one krajnost to another. Just as the ethnologist Dunja Rihtman-Auguštin "refused to be ashamed of the Balkans when she was expected to be," probably today she would "refuse to envy them, now that it is all the more frequently demanded of us." Because sometimes a Balkan is just a Balkan, and not an existential category.
Posted by Eric Gordy at 00:55 2 comments: 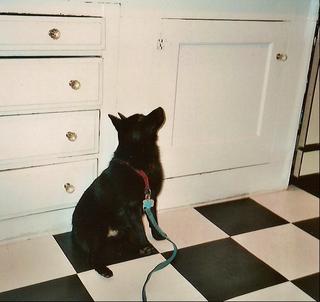 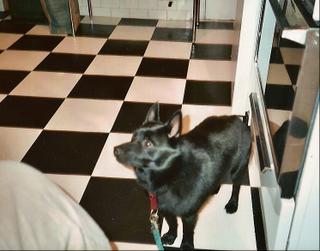 No Friday Random ten this week, as I am feeling a need to acquire new music. I did, however, hear on my favorite local radio station Medeski, Martin and Wood's version of "Hey Joe," must get a copy. This week we have Lajoš in the kitchen, looking very attentive to whatever may be going on in there. The survival strategy of a dog depends on always looking very hungry and very innocent, despite having a diet that is probably far more substantial and healthy than ours. He recently had the opportunity to meet one of his sisters, who was also walking at Jamaica Pond. There aren't too many Schipperkes around here, so when two of them meet the owners always question one another. This owner used her cell phone camera thingie to capture the siblings together, but still hasn't sent me the photo. Ah well.
Posted by Eric Gordy at 00:36 4 comments: 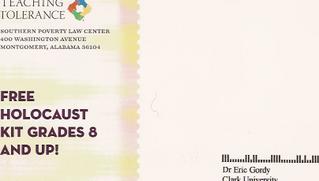 Got this offer in the mail today as a part of a promotion for a new educational kit from the Southern Poverty Law Center's "Teaching Tolerance" program. I am quite sure that they mean very well, and that they have probably prepared some good materials. But no thank you, really.
Posted by Eric Gordy at 02:23 2 comments:

Rock glazba made in Rijeka

Saturday, 9 October will be the world premiere of the film "Ritam rock plemena," in which director Bernardino Modrić and writer Koraljko Pasarić follow the rock n roll scene of Rijeka from 1960 to the present. After that, expect to find it at film festivals wherever there is an audience with a clue.
Posted by Eric Gordy at 02:46 No comments:

Globalize it, and I'll intellectualize it

Just came across this (I think) new publication by way of a link from one of my regular newspaper reads. Globalizacija is a "journal for political theory and research on globalisation, development and gender issues." It has several items taking a critical approach to neoliberalism and privatisation, with an emphasis on gender and economic issues. There is also an English language version for those who prefer it, and it would appear to be very much worth a look.
Posted by Eric Gordy at 02:36 No comments:

A widening corruption scandal, or something else

Here is a piece of breaking news that came out while we were walking our dog. Apparently Vladan Batić, the former justice minister who is president of the Christian Democratic Party of Serbia, is being held by police in connection with a corruption scandal. The given reason has to do with the release of an organised crime figure while he was minister. No concrete details, except that his party has issued a statement labelling the charges as political and saying that he has begun a hunger strike.

Update: It is still difficult to say what is up here. The official statement is that he "abused an official position" while he was minister, but it is not clear how. If the issue in question is the release from prison of a member of the "Kruševac group," this is something the justice minister could have achieved only indirectly, through prosecutors, judges, or the prison administration. On the other hand, the charge from Batić's party about the government using police to settle accounts with political opponents is not too persuasive either, as Batić can hardly be counted as a meaningful political force. My sense is that larger forces are probably not at stake, but that small ones may very well be.

Another update: On 30 September he was released, with no charges. This would tend to give credence to the thesis that it was political intimidation, though it remains unclear why anybody would have anything to gain by intimidating Batić. Alternatively, the government is such a panic over corruption that it no longer knows what it is up to.
Posted by Eric Gordy at 01:23 No comments:

A survey released today, commissioned by the British government and carried out by CeSID, suggests that if elections were held now, the Serbian Radical Party (SRS) would get 38%, the Democratic Party (DS) would get 31%, The Democratic party of Serbia (DSS) 9% and Bogoljub Karić's Forza Serbia (PSS) 8%. No other parties would get enough to support to gain representation in the parliament. The results are believable, in the sense that they are consistent with recent election results and other survey findings, and also with the expected erosion of support for the parties currently in power. CeSID also has a decent record of reliable research. Some time will probably pass before elections are called, of course, which means that the balance of forces could change, but not in a direction which would necessarily be predictable.

Assuming for a moment that the results would be as the survey indicates, this would mean: 1) once more there would be pressure for DS and DSS to form a coalition, which would certainly be hugely unstable, and 2) assuming the (not necessarily very likely) coalition mentioned in 1) is formed, the government would still be formed by whoever gets PSS to join the coalition, which means that Karić would be able to demand a very high price for his support. If the government were to be formed by a coalition of DS-DSS-PSS, it would be mostly incapable of action. If it were to be formed by SRS and PSS, the results would be disastrous for everybody both inside and outside the government. If DSS were to try to stay out of coalitions, this would leave an unstable minority government and also possibly the demise of DSS. There is always the possibility of a SRS-DSS coalition, which has been raised in various ways by DSS officials at various times, but would certainly be very controversial both in the party and outside of it. It might seem unreal, but then consider that SPS is keeping DSS in power now.

No matter how one tries to add up the numbers, they would not seem to mean anything good.
Posted by Eric Gordy at 21:13 6 comments:

The escape Klaus is in the fine print

The Czech president Vaclav Klaus expressed his worry about insistence on human rights to an international lawyers' conference, warning that respect for human rights might lead to regulation in the interest of defending them. Explaining his point, he argued that:

"Many partial, merely so-called rights, like the rights of consumers, children, women, disabled people and so on, replace a traditional understanding of human rights. When those new rights are brought into the legal system and lawyers accept them, they cause many serious consequences which begin to complicate social life and its quality."

It is not entirely clear what sort of "complication" he is concerned about, but it would seem to have something to do with what is involved in respecting the rights of women, children and other groups of which Mr Klaus is not a member.
Posted by Eric Gordy at 14:30 No comments:

I don't know how the story will turn out about the drunken Finnish EUFOR soldiers who spent an evening abusing the guests and staff and demolishing a club in Mostar. But it is not likely to enhance the welcome for international troops in Bosnia and Hercegovina.
Posted by Eric Gordy at 03:29 5 comments:

On the hyperreproduction of the relations of production

The vice president of the Socialist Party of Serbia (SPS) Milorad Vučelić says that there is really no reason for SPS not to join prime minister Koštunica's government. And really, he may be right, considering that the government relies on the support of SPS for its survival, and pays heavily for that support. The only reason for SPS not to join up would be that they are already well represented in the cabinet and elsewhere.
Posted by Eric Gordy at 16:17 No comments: