The coyotes among us 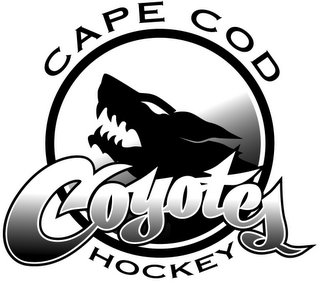 Thanks to Bora for linking to this. There are apparently a lot more urban coyotes than anyone imagined before, and they are healthy and beneficial. In Chicago, there are probably between several hundred and 2000, in every part of the city. They control the goose population by eating the delicious critters, and avoid humans with great success. And they go out at night more frequently than their rural relatives. Have a look at more details of Stan Gerht's urban coyote research.
Posted by Eric Gordy at 02:56 1 comment:

To any readers who are beginning their Christmas celebrations today, a very happy holiday to you.

Fond greetings also to anyone who is beginning to celebrate Kurban bajram, and a special shout out to the Bosnian Rastafarians (thanks, AR).
Posted by Eric Gordy at 02:04 No comments:

The district prosecutor in Novi Sad, Zoran Pavlović, told reporters to expect indictments against 19 of the 20 members of the neofascist group "Nacionalni stroj" on charges of promoting racial, religious and national hatred. The indictments would be issued, Dnevnik reports, "by the end of the week." Which would mean tomorrow.
Posted by Eric Gordy at 03:45 No comments:

Results of the East Ethnia poll

Since the thing was set up to accept multiple answers, and the program does not track, I do not know how many responses the survey got. It could be as few as 15 and as many as 62, probably somewhere in between. Unsurprisingly, the results show that people want most news and commentary (15 votes each). More surprisingly, the next most popular response was "Eric blathering on about his personal life (9 votes), followed by recipes and items about academics and the arts (7 votes each). The least frequent response was for jokes and funny pictures (6 votes). Three people expressed a preference for "something else," but didn't say what that was. So I interpreted it to mean that they wanted photos of very large heads of cabbage.

Hardly a scientific survey, but there you have it.
Posted by Eric Gordy at 13:20 No comments: 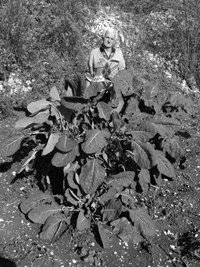 In his village near Trebinje, Rade Kokić grows some shockingly large cabbage. So large, nobody has got around to measuring it. But there is no doubt that it is large.
Posted by Eric Gordy at 02:07 8 comments:

What did Koštunica write for Obraz?

I first heard about the possible connection between current Serbian prime minister Vojislav Koštunica and the bizarre far-right group Obraz (the Vojvodina Assembly defined this cheeky group as "clerical-fascist," and has asked that they be banned) when the social psychologist Jovan Byford discussed an article that Mr Koštunica wrote for the movement's magazine (called Obraz, but the magazine predates the movement) in 1996. Dr Byford discussed the matter, and the genesis of far right movements generally, for Peščanik on 23 December.

The full text of the article is reproduced by B92. Anyone looking for shocking revelations, or even interesting reading, will be disappointed. The article is basically a recital of themes that are more or less standard in Mr Koštunica's milieu, most of them derivative of earlier renditions by writers like Vasilije Krestić and Dobrica Ćosić. So conclude what you will. I conclude that Mr Koštunica is not an original thinker and that he chooses his company poorly, but then we already knew that.
Posted by Eric Gordy at 12:39 3 comments:

The district court in Šibenik has announced that it has begun a criminal investigation against Dragan Vasiljković on suspicion of crimes against prisoners of war and against civilians. The announcement provides no details of the time, place or nature of the crimes. The court has also ordered that Mr Vasiljković be held in custody, which would be mostly a formality since he is in Australia, but it allows prosecutors to issue an international arrest warrant. In the recent past, Dragan Vasiljković has declared that he would willingly face any charges, on the condition that the Croatian government covers the cost of his airfare from Australia. I do not believe he specified whether he would demand business class or a vegetarian meal.
Posted by Eric Gordy at 15:50 6 comments:

For a snowy day

Today was to be the first day back at work for much of the family but snow has closed all the schools. So it is as good a day as any to join this online gamelan, wouldn't you say?

Just a note on the snow: there has been nary a flake all day. This may be what hardened educational professionals call an opportunistic snow day.

Update: Snow finally did start coming down around 1 PM (that's 1300 for y'all who prefer that sort of chronological measurement). A friend recently arrived from the tropics of Finland writes: "This was a real surprise to us that schools and daycare can be closed because of rain, like 'snow expectance'!"
Posted by Eric Gordy at 11:02 1 comment:

The Church on time 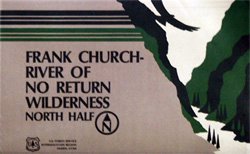 The last and only time that elected officials looked closely at the abuse of intelligence privileges for political purposes was when the "Church Committee," headed by Senator Frank Church of Idaho, produced its report in 1975. The activities uncovered included not just efforts to assassinate international leaders and destabilise governments around the world, but also another question that has been gathering attention recently: the use of intelligence powers to spy on US citizens. A selection of Church Committee documents is available in PDF form online. It would seem to make for timely reading again.

The director of the CIA at the time when the Church Committee issued its report was one George Bush. The secretary of defence was some guy named Donald Rumsfeld. Frank Church lost his reelection bid in 1980 and passed away in 1984, and neither of the others has been heard from since.
Posted by Eric Gordy at 03:06 4 comments:

An ounce of prevention is worth a lifetime of alienation 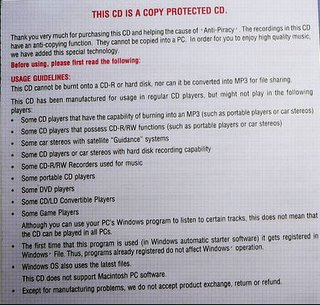 Via Boingboing (who got it from Itch.in), this insert was found in a CD by the band Coldplay, published by Virgin Records. I have nothing against Coldplay, although they are not high on any list of favorites either. I even have a sort of grudging respect for Virgin, however much their anti-corporate corporacity (something like mass pseudo-demassification) has worn thin over the decades (try as they may, they won't match Ralph Records). In any case, the overly aggressive "antipiracy" scheme has to be traced more to the corporation than to the artists, who will probably be blamed. A couple of notes here: 1) the strategy of telling people what they can do with products they have purchased is not likely to win lots of friends for the recording industry in this period of intensive decline caused by their failure (not for the first time) to adapt to new technologies that change the structure of the market, and 2) the declaration of contractual obligations of which one party is not aware until it is too late (the "contract" is hidden inside the shrinkwrap) should not get them too many micrometers past the door of a courtroom. Music publishers are sprinting toward a brick wall by trying to use repression as a response to their general decline, while there is good evidence to question the assumption that downloading and filesharing damage sales, and reason to suggest that these activities might increase sales, especially of work by lesser-known artists. But then, closing ranks is a sign of an institution in decay, and opening possibilities is a sign of emergent creativity.
Posted by Eric Gordy at 05:00 No comments:

Interesting site of the day

Human rights archaeology is a combination of diary, fieldnotes and short essays on the subject of cultural heritage in Kosovo and conflicts over it. The author, Sam Hardy, also maintains another blog dealing with questions of anthropological and archaeological theory more generally. Interesting reading, and also a good example of what can be done from the field with a combination of exposure, intellectual engagement, and the magic of network technology.
Posted by Eric Gordy at 16:08 No comments: