The police in Niš are compiling a pretty poor record of protecting people. They are much better at aiding and abetting skinheads.
Posted by Eric Gordy at 14:17 No comments: 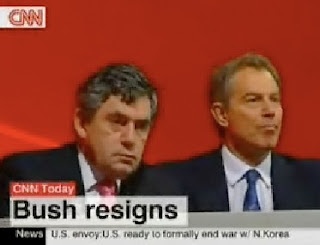 Thanks to MediaBistro.
Posted by Eric Gordy at 22:51 4 comments:

A government, after all

So the deal is: Grobar is out as parliament speaker, Koštunjavi gets to keep the police, and DS gets the military. So it looks as though the DSS coalition with SRS scared the others enough to make them back down.

The government will be weak and ineffective, and DSS will not stop flirting with the far right.
Posted by Eric Gordy at 12:07 4 comments:

A friend writes in, with news and photos!

i just saw your blog entry on the canned beef monument. back in my refugee camp days, i myself had to endure twice weekly "suha vecera" consisting of some white bread and cans of "beef in its own juice" which we lovingly referred to by its french name, also on the side of the can next to the picture of the cow head, "boef du son juis" or somesuch because i cannot write french. anyway, that was a convenient time to be a vegetarian.

the discussion on spam sort of misses the point - sending pork to a mostly muslim population under siege would be an insult even beyond the grasp of the international community. or maybe not...? with the beef, they got to feel all culturally sensitive even while sending this sranje.

but my real comment here is that when i visited this monument 3 weeks ago, someone had already altered its meaning. see attached. there is another curious piece of stone nearby, near the entrance to the istorijski muzej, formerly known as the muzej revolucije, which presents another subversive use of the monument genre. that is also attached with english and bosnian versions visible. the other sides say the same thing in french and german.

And now the photos, of the altered monument and the other monument. 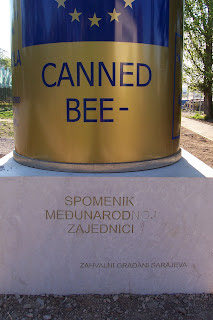 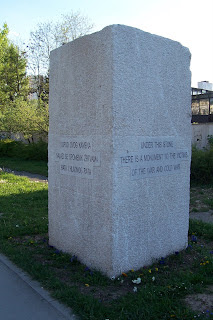 Early analysis sought to minimize the distress brought on by Tomislav Nikolić's election as presiding officer of the Serbian parliament, stressing that in the likely event that a government is not formed, the parliament would be dissolved on 14 May anyway, and new elections would be called. But today Nikolić proposed an answer to that problem: if a state of emergency could be declared, then no elections would be held. Of course there are many facts that could be interpreted as emergencies: Nikolić proposes the passage of a UN resolution on the independence of Kosovo, and others might suggest that Nikolić himself presents an emergency. Or maybe somebody might burn down the Reichstag.
Posted by Eric Gordy at 18:47 1 comment:

The gang that couldn't shoot?

Maybe I can be forgiven for failing to get excited about the government's announcement that they have foiled a terrorist attack on the soldiers at Ft. Dix. Partly this comes from the poor credibility of the folks making these types of announcements: the facts tend not to add up to the proposed sum, the prosecutions tend to fizzle, and it is often hard to avoid the perception that somebody is creating panic for panic's sake.

In this case, if there was a planned attack, it seems to have been exceedingly badly planned. A bunch of kids failed comically to maintain secrecy, trained by playing some silly "extreme sport" in their back garden, and planned to go shoot people at a place where they would be massively outnumbered by people who are better armed and trained than they are. Keystone terrorists?
Posted by Eric Gordy at 13:27 7 comments:

Monument to the international community 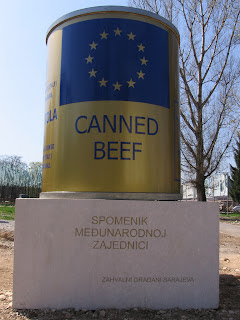 In recognition of the effective and unstinting assistance provided during the war, on Friday a group of artists in Sarajevo raised their "Monument to the international community": a metre high golden can of beef. Says Dunja Blažević of the Centre for Contemporary Art, "The message is clear. The Ikar canned beef is remembered by the people of Sarajevo with disgust. Cats and dogs did not want to eat it and people had to. Everybody agreed that we should do the project in this way. It's witty, ironic and artistic."

The person who kindly sent the news along wrote, "With the inscription, 'from the grateful citizens of Sarajevo,' the spam monument is dripping with sarcasm (and a sarcasm that those who are familiar with the region will be sure to recognize!). Besides the obvious chuckle factor, what really struck me about this new monument is that it uses the medium of the monument precisely to subvert its usual message. I think we're likely all familiar with James Young's concept of the counter-memorial, but something like the spam monument seems to be a whole new level of 'counter'."
Posted by Eric Gordy at 20:45 10 comments:

To protect and to serve

Police will not confirm this, but they appear to be favoring the conclusion that Dejan Anastasijević bombed his own apartment. This was the same police that concluded that Dejan Milenković Bagzi should be sent home with a warning for committing a traffic violation.
Posted by Eric Gordy at 20:17 3 comments:

Where are the strong and who are the trusted

East Ethnia has has taken the liberty of designing a government for SRS, SPS, NS and DSS now that they are on the verge of making public their coalition.

Minister for the Diaspora: Brana Crnčević

Without a doubt, this government should remind people of the good old days that the members of the coalition want never to end.
Posted by Eric Gordy at 17:42 16 comments:

Plus ça change, plus c'est Murta

The parliamentary coalition of SRS, SPS, NS and junior partner DSS has agreed to elect Tomislav Nikolić, an entrepreneurial graveyard director from Kragujevac, as president of the Serbian parliament. According to Nikolić, this is not "yet" a new governing coalition. According to DSS spokesperson Miloš Aligrudić, what motivated DSS to finally abandon any pretence of discontinuity with the old regime was the desire to prevent any changes at the interior ministry and the intelligence agencies.
Posted by Eric Gordy at 13:36 No comments:

Went to see The Namesake. It was good until about halfway through, then it turned into The Joy Luck Club. Ah well.
Posted by Eric Gordy at 04:58 5 comments: