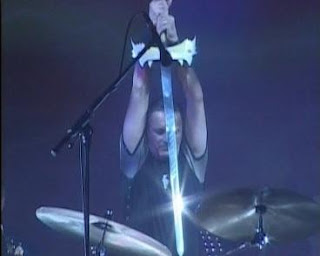 Photo: A gentleman named Perković performed at a big concert yesterday, during the course of which he did not try desperately to compensate for anything.
Posted by Eric Gordy at 17:13 No comments:

Two intellectuals in the news today. Slobodan Antonić confronts the mysterious fact that intellectuals have a hard time liking the folks who hate them. And Kosta Čavoški remembers wistfully when his pals were powerful enough to keep his furniture untouched.
Posted by Eric Gordy at 11:30 No comments: 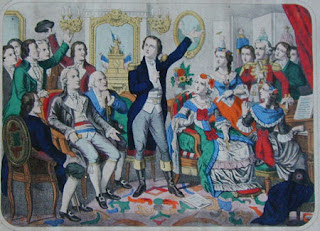 A few people may have been surprised about the gesture yesterday on the part of SRS, DSS and SPS to declare that they have reached an agreement to form a city government for Belgrade. Obviously the symbolic importance of controlling the local government in a city where these parties have never won an election (not this time either) would be hard to overstate.

When symbols are in question, respond with symbols. DS strategist Dragoljub Mićunović rushed to remind people that mayors can be removed by the city assembly, which people in his party have known since 1997. And the head of the assembly hurried to choose a late date for constituting the new assembly: 14 July. The date should be meaningful to the SRS candidate for mayor Aleksandar Vučić (try his delicious squid recipe!), who as information secretary in the Milošević regime controlled the media outlet known to everyone at the time as "TV Bastille."
Posted by Eric Gordy at 16:09 1 comment:

It is a fairly hot day in Belgrade, but this will not bother the heads of the DB parties, who will sit in the pleasant shade overlooking the fragrant animals of the Belgrade Zoo and sign an agreement to hand over the city government to SRS. If I had to guess, I would say that it will be a short-lived agreement and will fall apart as soon as the negotiations among the same parties to form a republican government fall apart. The whole business looks as though it was conceived by SPS to increase their blackmail capacity.

But it is entirely possible that SPS is overreaching. Their coalition partners are openly balking at joining forces with parties that want to quash the stabilisation agreement with the EU. And Milutin "pre roka" Mrkonjić has remembered what was no nice about having executive power in an illegal government: the opportunity to interfere with judicial power. So he wants amnesty for the criminals of the old regime as a condition for negotiating at all. A few more conditions like that, and it might be reasonable to expect no government to be formed and new elections to be called in the fall instead.

If new elections were to be called, there is a possibility that somebody might get a majority. There is less patience than ever for parties with a few seats behaving as though they are the majority. Another possibility is that SPS will finally have its long-awaited split, along the lines of the fractures that have become more than apparent in the last two weeks. DSS too.
Posted by Eric Gordy at 10:53 No comments:

I did not succeed in becoming interested in any of the songs, sorry. But a bunch of tourists came, they all seemed to enjoy themselves, and nobody was attacked by skinheads. So that has to count as a success.

Update: It seems some people were attacked after all.
Posted by Eric Gordy at 11:26 11 comments:

What becomes of the brokenhearted?

If Sv. Voja Neobavešteni actually does shuffle off, it will be a fight for control of DSS between people who want to preserve it as a centre-right party (like Aleksandar Popović, probably) and people who would always have been Radicals if only Radicals dressed better, like Slobodan Samardžić.

Whereas Terry Wogan would have to be replaced by Barry Gibb.
Posted by Eric Gordy at 07:21 3 comments: