Milorad Dodik, who runs the one-party statelet inside Bosnia known as Republika Srpska and who is the only Bosnian politician to have both a vision for the country and the mandate to implement it, was asked on the BHTV show Javna tajna Thursday whether he would wish to become Bosnian prime minister. He replied, according to BBC Monitoring,

Sarajevo, well, what you still have there is an unconsolidated political climate, which absolutely does not leave much room for creative people--and I believe I am one of those--to show [their potential]. I want to tidy up and organize the Serb Republic in order to make it the incontestably more developed part of Bosnia-Hercegovina in the future.

Creative people would be wasted on Bosnia's central institutions, in other words. Is that why he said in the same interview that he might send Nikola Spiric there?
Posted by T K Vogel at 22:23 No comments: 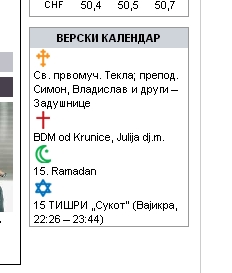 Not to pile on Politika (which I increasingly enjoy reading, especially on Sunday) or anything, but friend of East Ethnia Mirko sends in this tidbit I had never noticed from the bottom of the web page. As near as I can tell, aside from the occasional ad and the symbol for Swiss francs (which would look silly as цхф), the only Latin script that appears on the page is in part of the daily religious calendar. The Lord prints in mysterious ways.
Posted by Eric Gordy at 12:42 2 comments:

One of the interesting phenomena I was able to observe on my visit involves the long march of Politika back to respectability and its historic position as the premier newspaper in the area. Last Monday, they initiated a strategy of reputation-by-association, running a special additional section (in English) of articles selected from Sunday's New York Times. It's a nice section, and undoubtedly useful both to people who want a glimpse at international media and to people wanting to keep their English language skills in shape. In the interest of achieving that second goal, the section contains a box at the bottom of the second page, prepared by the Institut za strane jezike, with translations of some rare or new English expressions. A very nice idea altogether. The first item in their little glossary was:

Why no posts for a week, you may or may not ask? Your humble correspondent was globetrotting to glamorous destinations. Beograd, Niš ....

The trip to Belgrade was for a conference (sponsored by the Association for the Study of Nationalities and the Forum za etničke odnose) organized by distinguished Ethnian (and according to Slobodna Evropa, "britanski ekspert") Florian Bieber. Simply fantastic stuff, and many perfectly charming people. In the meantime, there were the interesting elections in BH on which TK has been leading debate here (imagine! politics in an election!), and Serbia got a constitution written overnight and approved by a Parliament whose members had not had the time to read it, to be followed at the end of this month by a referendum which could easily go either way. In response, the courageous leaders of G17 resigned their positions but did not leave them.

It is always a pleasure to go to Niš, to which the buses get more luxurious each time I go. This was a short visit, but I think our project (about which more when there is concrete news) is really moving forward. It is surprising that more people do not go to Niš. I am not saying that everybody needs to visit, just everybody who loves peppers.

So now I am back, and between home and work I will be resuming my normal syncopated rhythm of posting. Thanks for your patience. It looks like the United States was a complete disaster while I was gone. Lunatics shooting schoolchildren? Congressmen schtupping teenage boys? What on earth?
Posted by Eric Gordy at 12:22 3 comments:

All for democracy, as long as I get elected

Voters in Bosnia's general election yesterday (October 1st) pushed the system to its absurd--but logical--extreme: it looks increasingly likely that Željko Komšić from the non-nationalist SDP might be elected Croat member of Bosnia's three-member presidency, with a substantial chunk of his vote coming from ethnic Bosniaks. The reason is simple: while the three co-presidents are representatives of Bosnia's three constituent peoples (Serbs, Croats, and Bosniaks), voting is organized by entity. Residents of RS vote for the Serb member while residents of the Croat-Bosniak Federation vote for the Croat and Bosniak members. The SDP recognized that it stood no chance of winning against either incumbent Sulejman Tihić nor indeed Haris Silajdžić, whose victory last night was unexpectedly convincing, so they presented a candidate for the Croat member. Incumbent Ivo Miro Jović, who made a scene at the TV studio and insulted journalists there, announced that "Ivo Miro Jović will be the Croat member of the B-H Presidency or the Presidency will cease to exist," in a remarkable display of his understanding of how democracy works.