See you in a couple of days

Just taking a break from packing to let you know that I travel today. I'll have more words for the esteemed readers of this site when I resurface in the lovely Balkans.
Posted by Eric Gordy at 14:26 5 comments:

Last week I posted an item indicating that the UN ombudsguy for Kosovo, Marek Antoni Nowicki, had given a statement offering vague support for the suggestion that the Bondsteel military base may have been a "secret prison" site. Now his office has issued a denial. It seems as though neither the statement nor the denial is definitive, and the question remains open.
Posted by Eric Gordy at 14:22 No comments:

New blog for my students

This last semester I tried using a blog as a way of sharing interesting topical material with students. Now I have decided to expand the effort into one blog for all of my students in all of my undergraduate courses. The new site has a new name, and Blogger was kind enough to provide a standard template in the Clark University colors (which must now be ecru and burgundy, yes?). So I humbly offer you The Iron Cage. There isn't much there now, just some old posts from the previous incarnation and lists of books for next semester. There might be some stuff to interest people who are not taking my courses, but then again there might not.

If you are one of my students, this should be your first stop for basic information: anyone who mails me asking what books to buy or what the assignment is will get a note back from me saying "check the blog." It should also be a regular stop by which you can anticipate surprises. Discussion and debate are welcome, but comments are moderated.

I know why the caged bird sings

Yesterday I ran an item from the Spanish press indicating that police thought that Ante Gotovina had not been in the Canary Islands longer than five days. Today AR sends along an item suggesting that he had been in the islands since September. This report from La Opinión de Tenerife indicates that police began to take interest in him in September, and that he spent considerable time moving from luxury hotel to luxury hotel, never staying longer than a week and using a variety of pseudonyms:

And La Provincia reports that he had 12.000 Euros in cash in his hotel room. And BBC reports that whenever his sojourn in Spain began, it probably ends Saturday.

Update: This is cool, a video of his arrest (Windows Media, desgraciamente). I think that he was having an appetizer of some bread and cheese and that the mysterious Mr Grgić (no relation to the very good California winemaker, I hope) was having some soup, but then the mineral water bottle looks like it is nearly empty, so maybe they had already started dessert. But without coffee? Curse these small internet video screens.

Update2: And where was he coming from? We still don't know, but the AP reports that "The passport Gotovina was traveling on in the Canary Islands had entry and exit stamps from Tahiti, Argentina, China, Chile, Russia, the Czech Republic and as recently as Nov. 25, from the Indian Ocean island of Mauritius."
Posted by Eric Gordy at 14:49 1 comment: 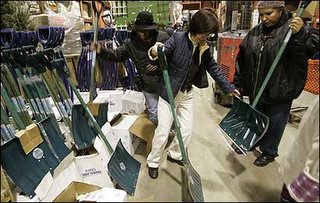 One of the best things about classes having now ended is that I can retire my "travel coffee cup" for a while. This is an insulated metal mug which has a lid with a little hole in it that can be screwed onto the top. It is supposed to allow me to drink coffee in my car on the way to work on those days (most of them) when I am not efficient enough to manage to drink my coffee in the way that civilised folk do. What happens, inevitably, is that once I am dressed in my fancy work togs, the device drips coffee down the front of them. Every time this happens I am led to think that a conspiracy is in question, and I am sure that the malicious Mr Zegna is at the center of it.

The morning has also greeted us with a beautiful snow, which although it might interfere with my plan to buy gifts for our friends down Balkan way, is a lovely thing. Unfortunately, all of the school districts in the area except Boston and Brookline cancelled instruction for the day, so we had to wake up all the same.

Tomorrow I am off -- I should arrive in Belgrado sometime on Sunday (which means that I will miss the Maniac Shop street fešta), and then I am off to Niš on Tuesday. If there is any blog silence it should be brief, and I will be happy to bring you updates from the shores of the mighty Nišava.

Remember Tomislav Dragun, who was able to get Milan Kangrga to recognise him as smarter than an unspecified animal? He has not had enough of adventures in court, so he has now filed a complaint against Carla del Ponte and a few other people, on the ground of making false accusations against Ante Gotovina. Thanks to Edo B. for the tip.

In related news, authorities in Belgrade have removed a huge condom from an obelisk dedicated to the first summit of nonaligned nations, which had been placed by AIDS activists. Not to be outdone, an obelisk in Buenos Aires sports one three times larger, but this one has the approval of city authorities.

History is written by the historians

The project began with a comparative study of history textbooks in Southeastern Europe, and it has now reached the point at which it has released four volumes of history, produced collaboratively by 60 historians from 11 countries in the region. Read about it in Vreme, in a short analysis by Slobodanka Ast, followed by brief interviews with project sponsor Kostas Karas and project participant dr Dubravka Stojanović.
Posted by Eric Gordy at 15:24 4 comments:

This just in: Gotovina arrested

B92 reports that he was arrested in the Canary Islands. Index is following the story as well. Also some obscure British outfit. Keep track of new reports from Google news. This just after I had a nice exchange on the topic with the talented young historian Vjeran Pavlaković, who presented his research on the case at the Woody Wilson Center earlier this week.

Update with a question: How long was Mr Gotovina in Spain? Here is what the news site cope.es says:

So Spanish police do not think that he was in the Canary Islands for more than five days. We do not know where he was before that, but may find out (thanks, András). This news item also gives a pseudonym different from the one that is riduculed in the comments to the post, don't know whether "Horua" or "Horvat" (shouldn't that be "Horváth"?) was actually used.
Posted by Eric Gordy at 12:18 15 comments:

It has been hard for me to write anything about this whole business about "rendition" and torture and secret prisons, because both the scale and rankness of it have, to be honest, struck me personally, and the sort of string of foul language I am most inclined to produce would not make for a good blog post. The only insight I have relates to the Bush administration's apparent habit of demolishing the credibility of its secretaries of state (in the case of this one, not a difficult task). Beyond that, all I have to offer is the expectation that this administration's extremism, adventurism and intentional disregard for international law will have us paying a very high price for a very long time.

Nor have they denied reports that are out. Rice's strategy has been to tell European governments to "back off," offering incentive in the invitation of governments to examine their own complicity. In fact, there may well be good legal ground for examining the complicity of any state involved in the process, and it appears that there have been several.

The movements and landings of aircraft can be reconstructed, and efforts to cover them up traced. Khaled al-Masri's lawsuit will force the creation of a public record. What is done in secret will not remain secret. The people responsible will carry fewer of the consequences than everybody else.
Posted by Eric Gordy at 02:48 No comments:

Disturbing news item of the day

So appalling, I do not even have the heart to tell you what it is about.
Posted by Eric Gordy at 01:52 1 comment:

Much of the old socialist jargon, like "complicated organization of friendly work" (složena organizacija udruženog rada--SOUR), has gone the way of the handleading structures (rukovodeće strukture) that introduced the terminology. Among these is that much-loved local selfruling monad (samoupravna jedinica), the meat society (mesna zajednica). But the functions of local administration have not, of course, disappeared along with the titles of the people responsible for them. Now it seems that in Vojvodina an old title has been reintroduced -- the title of the "knez." Literally the term means "prince," but this folk practice is probably not a sign of the reinfestation of the land by royalty. The term was used for the (generally elected) leaders of local village adminstration in earlier years. Miloš Obrenović was a knjaz, not a knez, so the mineral water has got it right and the street (formerly Miloša Velikog) has got it wrong. The former president of the Kikinda district council, Duško Radaković, explains that "we thought it was cute" to use the archaic term in place of the unwieldly "president of the commission of the local assembly," and that the usage appears to have caught on. If there are a bunch of people going around calling themselves dukes, they are another story entirely.
Posted by Eric Gordy at 15:29 2 comments: