Are you in or near London? Do you have an interest in people from eastern Europe and documentary film? I thought you did, and that you would therefore be interested in the London in Motion UCL Documentary Film Workshop to be held in November. The deadline for applications (form available at the site) is 1 September.
Posted by Eric Gordy at 14:05 No comments: 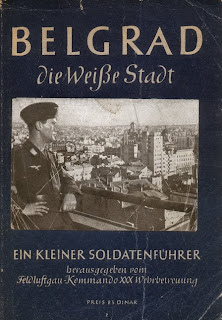 So it seems that somebody has caught up with 86-year old Peter Egner, resident of a retirement home in lovely Bellevue, Washington. According to the charges, Mr Egner, who came to the United States in 1960 and received citizenship in 1966, was a member of the Nazi security police in Belgrade between 1941 and 1943 where he acted as an interpreter during interrogations of prisoners and guarded transports of prisoners (at least) between two prison camps in the city. During the first nine months of the occupation, it is charged, he was a member of a unit that killed thousands of civilians, mostly by asphyxiation.

The suspect is not commenting and his lawyer says that the charges are vague.

A little bit more: the government has filed a case to revoke the old murderer's citizenship (here is the full text). Some guy says that he is a gentleman. While his neighbours seem to think that being a Nazi has something to do with privacy.
Thanks to AR for the charming photo.
Posted by Eric Gordy at 11:00 2 comments:

Bless the ultrarightists who call themselves leftists, they are outraged that SPS would join a government with DS. So now Hegel iz naših sokaka, Če da krade donacije od izbeglica, and Aca bivša faca have announced their intention of forming a new party. Mihajlo Marković rose out of his crypt to declare the new party's platform against "brutal trade, prostitution and unnatural acts," then scurried off in terror at the sunrise.

There is at least one set of rumours out there suggesting that they need not have bothered. According to this version of the near future, SPS will be out of all coalitions and LDP will be in. Or else -- get this! -- new elections, which DSS and SRS are hankering to lose while SPS is still uncertain whether it wants to lose now or later.
Posted by Eric Gordy at 15:05 2 comments: