Yugo faster than yu ought to 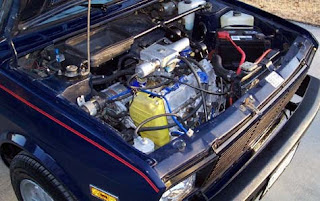 This was a home project that probably had to happen. For better or worse.

A view opposed to what I posted below comes by e-mail from friend of East Ethnia (and plaintiffs' witness) Andras Riedlmayer. Here it is, shared with permission:

As you know, a summary of the judgement is posted at:

"[...] With respect to the destruction of historical, religious and cultural property, the Court finds that there is conclusive evidence of the deliberate destruction of the historical, cultural and religious heritage of the protected group. However, such destruction does not fall as such within the categories of acts of genocide set out in Article II of the Convention."

In other words: my evidence was found to be convincing, but legally irrelevant. The latter is more or less as expected, though disappointing all the same.

But the logic of the World Court's decision as a whole is troubling. As Le Figaro aptly headlined its report on the ICJ ruling:

There's some measure of reassurance in the words of the dissenting opinion appended to the ICJ ruling by the Court's vice-president, Judge Al-Khasawneh:

[...] On the merits, Vice-President Al-Khasawneh felt that through a combination of methods and assumptions, uncalled for in law and not suitable to the facts of the case, the Court achieved the extraordinary feat of absolving Serbia of its responsibility for genocide in Bosnia and Herzegovina save for failure to prevent the genocide at Srebrenica, where in any case he thought Serbian responsibility was more actively involved than the mere failure to prevent.

Firstly, since intent is usually elusive and, together with attributability, often carefully concealed, the Court should have sought access to the papers of the "Serbian Defence Council" which would probably have made the Court's task much easier. Refusal of Serbia to divulge documents should have led at least to more liberal recourse to evidence. By insisting on a very high evidentiary "standard" and no shifting of "Burden of proof", the Applicant was put at a huge disadvantage. Secondly, the Court also applied a strict test of effective control: the Nicaragua test, to a different situation where inter alia shared ethnicity and shared purpose to commit international crimes, e.g. ethnic cleansing, require only an overall control test. Thirdly, the Court also refused to infer genocide from a "consistent pattern of conduct" disregarding in this respect a rich and relevant jurisprudence of other courts. Fourthly, the Court failed to appreciate genocide as a complex crime and not a single murder. Therefore, events which when looked at comprehensively gave rise to responsibility of Serbia, were instead seen in a disconnected manner, e.g. the participation of General Mladic in Srebrenica and the role of the "Scorpions". Fifthly, even when there was a clear admission of guilt, e.g. the Serbian Council of Ministers' statement as a reaction to the video showing the execution of Muslim prisoners by the "Scorpions" was dismissed as a political statement though legal weight is attached to such statements in previous Court jurisprudence some of which the Court did not even invoke.

The Vice-President concluded that had the Court tried to see for itself it most probably would have found Serbia responsible either as principal or an accomplice in the genocide in Bosnia. This it could have done without losing the rigor of its reasoning or the high standards of evidence it required. With regard to Srebrenica he was sure that active Serbian involvement was proved to satisfactory to standards in facts and in law. [...]

Unfortunately, he was in the minority.

I am still going to have to give the ICJ decision some study, but my initial take (brace yourselves and prepare to disagree vehemently) is that the judges made a pretty good decision.

Some of the reactions in BiH are unsurprisingly less than delighted. Sulejman Tihić probably spoke for a lot of people when he said he was "not completely satisfied" with a decision that confirmed that genocide occurred but did not confirm the government's claims about who was involved and about the scale. Victims' associations are a lot less satisfied, which is also to be expected. There are a couple of things to keep in mind here, though. First, the suit was filed in 1993, while the war was still going on, with the intention of producing a legal finding that would obligate other countries to intervene. It made maximal claims about the events, and the evidence to support these claims to the satisfaction of a high legal standard was not available at the time and still is not. So it is not surprising that several years later the court's interpretation should do something less than support maximal claims. This is not necessarily a bad thing, either, in the sense that it offers a basis that will let the BiH government move away from rhetorics of pure victimhood, and maybe toward a more inclusive account of what happened between 1992 and 1995.

In Serbia it does not seem that the judgment is being taken lightly. Over on the far right, Tomislav Nikolić stepped back from self-congratulation to show that he is aware that the finding that genocide occurred will not be useful to RS. No doubt he had in mind the court's statement that Serbia is obligated to support and assist in undoing of the results of genocide. B92 is offering more initial reactions, and while there are unsurprising comments from Vojislav Koštunica and Milorad Dodik interpreting the decision as a complete negation of responsibility, people with real responsibility are offering statements that are more, well, responsible. The statements by the lawyers for the defense and by Serbian war crimes prosecution spokesman Bruno Vekarić are constructive in the sense that they point to the "failure to prevent and punish" finding as obligating Serbia. President Boris Tadić took the opportunity to remind citizens that the state is obligated to clarify its position on the genocide that occurred. These are mostly useful responses.

The greatest hope was always that the court might find a way of reaching a conclusion that would move the process of open discussion forward rather than fixing it at some predetermined point. For now I am inclined to think that they did the best they could. Time will tell us a lot more, of course.

Having said that, it seems that there are also some important issues that are not resolved in the decision. The finding that a crime occurred but that nobody is guilty of committing it tends toward a bizarre sort of mysticism. And the finding that the Serbian state is not responsible seems to be based on a very strict interpretation of rules of evidence, in which the destruction or withholding of documentation may have proved to be an effective strategy, and indirect evidence was not treated as relevant. This seems to offer a sort of legal invitation to criminals to cover their tracks, and the precedent will probably be controversial.

Not everyone will agree with me, of course. What I have seen in Blogland so far: Viktor Marković was hoping for a middle path and got it, while Neretva River flows colder, worried that the decision is a backhanded acquittal of Milošević. And Yakima Gulag finds the end run around the issue of guilt "lame assed" (and I have a feeling she is not thinking of an injured donkey).
Posted by Eric Gordy at 15:33 9 comments:

A press release, the full text of the court's decision and of separate and dissenting opinions, and a not very brief summary. I will have some sort of analysis, most likely tonight.
Posted by Eric Gordy at 13:11 3 comments:

First signs of a mixed verdict?

No complete reports are in just yet, but the preliminary ones I am seeing seem to be pointing toward a mixed verdict. According to Reuters and Index, presiding judge Rosalyn Higgins is reading the ICJ verdict which defines the killing around Srebrenica in 1995 as genocide, but stops short of accepting the plaintiffs' argument that genocide was committed on the whole territory of Bosnia-Hercegovina. It will most likely be a few hours before it becomes clear how this adds up to a disposition in the case, and before the transcript of the decision is released (at this spot, when it is). I'm a bit busy with other things today, but will try to keep you posted as well as I can.

Update: Mixed as can be, BBC's report says ICJ rejected the charges, on the basis that the direct involvement of Serbia was not shown. These early reports will tend to be confusing, though, as reporters try to sum up what they have heard all of yet. I can link to each report as it comes in, or just hang on for the end. Probably better to hang on.

Another update: Back to Reuters, which is reporting the verdict as: 1) there was genocide at Srebrenica, but 2) Serbia did not commit it, but still 3) Serbia did fail to prevent and punish it.
Posted by Eric Gordy at 11:34 1 comment:

Found these through a link at the Belgrade blog, 41 very fine photos of Belgrade (mostly) by Nikola Mrdalj. Set it up as a slideshow, sit back and enjoy.
Posted by Eric Gordy at 00:58 No comments:

Waiting for the verdict

Tomorrow the International Court of Justice in the Hague is expected to make its ruling on the lawsuit by Bosnia and Hercegovina charging the Federal Republic of Yugoslavia (at the time of the filing of the suit; Serbia and Montenegro at the time the case was argued; Serbia and Montenegro separately now) with committing genocide between 1992 and 1995. While the case was being argued last year, I wrote a series of posts (1, 2, 3 and 4) looking at some of the issues involved. Of course I cannot predict what the ruling will be tomorrow, but in anticipation of it I'll offer just a few observations.
With that, all there is to do is see what happens tomorrow. This type of business will always be implicated in day to day politics. The Serbian Radical Party wants the country to quit the UN in the event of a guilty verdict. Afghanistan's parliament has passed a resolution granting amnesty to a whole hatful of powerful war criminals. And the general assembly of the state of Virginia has passed a resolution apologizing for slavery. Insistence on denial or opening up the books are pretty much the only options available. Time does not make anything go away.
Posted by Eric Gordy at 21:48 4 comments: