Quote of the week

Tomislav Nikolić, Serbian Radical Party, quoted by B92: "'Serbia has to be divided between democrats and radicals,' citizens have to decide between two large parties, and 'there is no room for the existence of some third, with an unknown profile which will in the end decide which of those two parties will be in power'."

This came in an article about how Novi Sad mayor Maja Gojković has distanced herself from the party since taking office, but it does sound like Mr Nikolić is speaking in the general sense. Is it time for people to ask, finally, which side they are on?
Posted by Eric Gordy at 20:56 No comments:

It is a while since this blog has memed, but we have been caught with one by everybody's favourite coturnician blogger Bora. He is asking for experiences with animals, so there is no way I could not comply without the help of my daughter. Azra's answers go first, followed by Eric's:

An interesting animal I had

A: Lajos, my cute little Schipperke.
He is always up to something. He is a little naughty. A dog may not be so interesting by “type of animal” standards, but by doggie standards he is very interesting.
He is also about as well travelled as any other dog around. He has been trans-Atlantic 8 times so far, and he’ll be continuing to go trans-Atlantic for quite a while. He has been driven across the USA. He has been to many countries in Europe. Pretty much everywhere I go, he goes with me.

E: We used to have a horse named Amigo. Although his name meant friend, in fact Amigo had kind of a mean sense of humour. When we would take visitors for a ride on the beach, whoever was riding Amigo would get the surprise of breaking away suddenly from the group, running out into the water, and getting thrown in. This was the only kind of nestašluk in which he ever indulged.

An interesting animal I ate

A: Ostrich. I had it in a goulash, and it tasted great! Ostrich goulash was my favorite food for quite a while.

E: I love the Bambi paprikaš at Lovac, and also at the Čuburska lipa restaurant which is operated by Josip Broz, who shares a name with his famous grandfather.

An interesting animal in a museum

A: In the Harvard Museum, there is this enormous turtle/tortoise (I’m not sure which) shell from a prehistoric turtle/tortoise. It’s big enough for an average person to climb in and move around comfortably (though they wouldn’t be able to stand up). I always love seeing it.

E: The monkey house at the Belgrade zoo is always a treat. Partly for the monkeys, which are always up to something sort of humanesque. But it is best when there are a lot of people there, who try to get the attention of the monkeys from the other side of the glass. It is not always possible to tell which animal is on display for which.

An interesting thing I did with or to an animal

A: I gave my dog a swimming lesson. We would go to the beach and drop him in the water. He would immediately doggie-paddle (ha-ha) towards the shore. We’d have to ambush him, and then he would go swimming around, sneezing in protest. Eventually, though, he learned to like it. I wish he’d known that from the beginning!

E: I don’t know why this question keeps giving me images of dissecting frogs and the like in high school biology. That job always disgusted me, everything from the implicit cruelty and pointlessness to the smell. Strangely, when I put herbed butter underneath the skin of a chicken, it doesn’t bother me a bit.

An interesting animal in its natural habitat

A: There’s a type of frog that lives in Australia that makes its nice cozy home in a toilet. I think that’s about as interesting a natural habitat as you can get! Before toilets were invented, they had to make do with murky swamps.

E: I don’t know how interesting they are, but they have a lot of charm and are nicely suited to the limits of their environment: prairie dogs!

The practice, I think, is to tag other bloggers with an instruction to respond. I think what I will do instead is just encourage people to respond if they feel so inspired.
Posted by Eric Gordy at 01:53 1 comment: 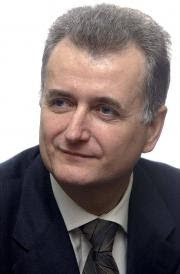 Today the mayor of Belgrade, Nenad Bogdanović, died after a long illness. He was smart, modest, decent and energetic, and gave an idea of how political life might be different if every public official was engaged with their community and had the ambition to do the right thing. The first directly elected mayor of the city leaves it behind cleaner, better organised, and better connected with the world around it than it was before he started the job.
Posted by Eric Gordy at 21:37 1 comment:

Credit where it is due

If anybody has been following my ongoing visa saga, note the difference here. The timeline of receiving entry clearance is as follows:
Reliable and swift information, no delays, no problems, no complaints. That is the way it is done. I'll bet they could learn to do that in Sheffield too.

Next up is to confirm travel plans and get those students in London taken care of.
Posted by Eric Gordy at 16:21 1 comment:

We have a ton of maslačak. If anyone has any tasty recipes for it to share, they will be ever so welcome in the comments. I already know that chopped up and mixed with tomato in a salad is just delightful.
Posted by Eric Gordy at 15:39 4 comments:

The police in Novi Sad have decided, after all, not to permit the march that the local neo-Nazis had planned to mark, of all things, the birthday of Heinrich Himmler. But racist fools will still have a safe place to meet, regardless.

Addendum: Marko Jakšić is no relation to Duško Jakšić or Boža Jakšić, both of whom merit the highest admiration. And Goran Davidović does not want you to call him Führer, please.
Posted by Eric Gordy at 15:28 No comments:

It would be a fun little tidbit for any cheeky chronicler of politics (for example, Wonkette) to note that the Kennebunkport Bushies are not adored by the fellow who maintains their swimming pool. Of East Ethnian interest may also be the fact that the same guy's brother made this fine documentary film about anarchists and other folks in Zagreb.
Posted by Eric Gordy at 16:22 1 comment: