Line from a news item on B92 regarding the decision by Apple computers to recall the Sony batteries on its iBook and PowerBook computers:

"Baterije su povučene iz Eplovih računara Ajbuk G4 i Pauer buk G4."
Now, with all respect to Vuk and the formulation everybody knows, which commands "Пиши као што говориш и читај како је написано" (apparently, it is not original to him), I still say: "Epl?" "Ajbuk?"
Posted by Eric Gordy at 17:05 2 comments:

The Ups! festival in Zadar might have been a pretty good event. The program included The Beat Fleet, Let 3, Damir Urban... But then all three of them cancelled their appearances after discovering that among the sponsors of the festival was the "Society for truth about the Homeland war" (Zaklada za istinu o domovinskom ratu), which was planning to use the festival to continue their marketing of Ante Gotovina t-shirts.

Saša Antić of The Beat Fleet explained the band's decision: "The Society for truth abouth the Homeland war accepts the ideology of hatred and of racial, religious and national discrimination. That is not the way to achieve world peace, which we as a band try to advance."

The question arises as to what the Society thought they were doing in the festival in the first place. Among the mystified is Davor Fadić from the Zadar youth organization ZVUK – Zadarska vizija urbane kulture: "On the one hand, if you look at the texts and messages of the bands, and on the other hand the work and vision of the Society it is clear that these are two completely different things. The bands confirmed this with their boycott." At the request of the organizers, the Society has withdrawn its sponsorship. The damage is done all the same.
Posted by Eric Gordy at 03:14 4 comments:

Šeki is on the road again

If it were not for Vojislav Šešelj, we may never know how easy it is to make the move from left-wing Stalinism to right-wing Stalinism. No wait, that would be obvious without him too. In any case, he has now had counsel imposed on him. Hard not believe that he wanted that all along, considering his colorful correspondence with the trial chamber.

Update: Oh, but necronostalgia is all over the place today. Mirjana Marković gave an interview to the dependable Večernje novosti. Upon which I will not comment.

Update2: It would be interesting to see what would happen if anybody tried to engage children involuntarily in these festivals of necrophilia. Oh, but that is already happening.
Posted by Eric Gordy at 20:07 4 comments:

Musical notes from both sides of the wall 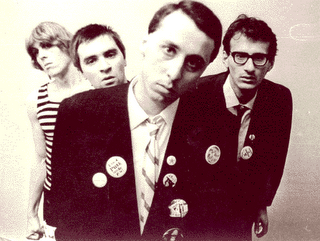 In better news, Igor Burić has an interview in Dnevnik with Mr Nebojša Čonkić of Toronto, known to his millions of fans around the world as Čonta of the fondly recalled group Pekinška Patka. The group has just released a CD with remastered versions of pretty much everything the group ever put out, back in the day. It will be my first purchase when I return to Belgrade next time.

Back to unhappy musical news: police in Split decided that a public concert by the French group "Imperial Kikiristan" -- I have never heard of them, but if Jurica Pavičić's desription is any good, they must be hugely entertaining -- amounted to an "offence against order and peace" (the people nearby seemed to disagree, and so intervention units were called in). So the musicians spent the following night and morning in prison.
Posted by Eric Gordy at 02:14 6 comments: