We are off today for a holiday visit to our friends in lovely Baltimore, most likely back late Saturday night. There may or may not be time for a post or two in between cooking and socializing. If not, everybody enjoy a fine rest. The next couple of weeks will be intensive -- end of the semester, and then immediately off for a winter sojourn in Niš.
Posted by Eric Gordy at 14:26 1 comment:

Between frequent rest breaks, Slobodan Milošević has used up three quarters of the time which was allowed him to conduct his defence, and has concentrated most of this time on the first (and original) set of charges against him, in connection with violations of international law in Kosovo in 1999. He has shown that he is not an especially capable lawyer, that he does not have the physical or intellectual capacity to do the work of a legal defence, and that he is not willing to withdraw in favor of a legal defence which might be capable. This might be because he plans to appeal his eventual conviction on the ground that he did not receive an adequate defence, it might be because he is using the trial as a regular television broadcast, or it might simply be because he is conducting his defence with the same monomaniacal ineptitude with which he committed the violations that led him to be charged in the first place. As the trial has dragged on and on, it has become less the revealing and cathartic event which was intended -- even the live broadcasts draw an audience only on those days when a colorful witness is called.

Now it looks like there is a possibility that the show might be cancelled. When it comes back into session on 29 November, the Tribunal will consider a proposal to retroactively separate the indictments against Milošević. This would mean that they could deliver a verdict on the Kosovo indictment and hear the defence on the Croatia and Bosnia-Hercegovina indictments sometime in the future, if at all. Leaving aside the procedural decisions which led the trial to this state, that sort of half-finish without resolution would offer one more example of why the job of establishing historical truth and of contributing to peace and reconciliation is not one that should be put in the hands of lawyers. The tendency is to offer process rather than substance.
Posted by Eric Gordy at 16:06 29 comments:

HRT and Nova TV do not sikiriki 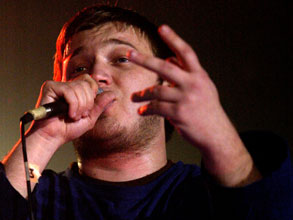 Courtesy of Index.hr, here is the full text of the song "Mater vam jebem" by Edo Maajka, for which HRT and Nova TV have decided that they would not broadcast the video spot. It is true that the song contains some of what the linguists among us call by the technical term "naughty words," but this may not necessarily be the thing that bothers the TV producers.

The excellent news and commentary source that I have linked in the "Broadly international" section of the links here is the radio program (also available as a podcast) Open Source, which is hosted by the wonderful interviewer Chris Lydon together with several collaborators. It is a coproduction of WGBH and the University of Massachusetts at Lowell, and it is distributed through Public Radio International. Lovers of good radio will certainly remember Chris Lydon as the extraordinarily insightful and well-prepared host of The Connection, which is now hosted by Dick Gordon. The new project grew out of Lydon's inspiration to integrate the formats of radio and bloggery, and the result is a tremendously innovative program with far more interactivity than the broadcast product that most people are used to.

This project has nothing to do with a new, well-financed, and to all appearances thoroughly mediocre project which is going under the name Open Source Media, which would appear to be a promotional outlet for a group of right-wing personalities from blogs and media. Their frequently-revised claims to the contrary, they would appear to be using the name of an existing organisation unethically, and perhaps trying to muscle the name away from its originators. Does anybody remember when the forgotten sycophant Dragutin Brčin attempted to do the same thing?

Update: It looks as though they have listened to the objections and no longer claiming the name. Instead they will be going as "Pajamas Media," possibly because after you have used them it is time for a shower.
Posted by Eric Gordy at 16:55 3 comments:

In time for holiday shopping

"Ten years after the end of the war, Bosnian ethnicity continues to matter and the country remains dependent on international intervention. The Dayton Peace Accord signed in 1995 successfully ended the war, but froze the ethnic conflict in one of the most complex systems of government in the world. The book provides an in-depth analysis of governance in this divided post-war country, providing important lessons for international intervention elsewhere around the world, from Afghanistan to Iraq."

Wake up early to get in line, there will be crowds for these 200 pages of pure Balkanological reading pleasure.
Posted by Eric Gordy at 15:55 No comments:

This week is a little bit of a breather before the final exam crunch begins in early December. I have not posted since Thursday because I had to scramble to finish an article (about which more soon), and also because my sister has been visiting from Seattle. We had to give her the opportunity to taste all of those things she cannot get at home, so we took her to Azra's favorite Chinese restaurant (my advice: try the crispy duck in addition to your other favorite dishes), to Roslindale's legendary site of Albanian cuisine pilgrimages and to Cambridge's always reliable Portuguese standby. All that and several good dog walks, a breakfast brought to our cousins on their first day in their new apartment, and even a bit of good home cooking. Plus the article got finished!

So I hope to have some new items to post tomorrow, then we head off to Baltimore for a short holiday visit. We are tired of turkey, so your goose recipes, if you have them, will be received with a welcoming smile. Our destination is the home of our former neighbors, and whenever we go there I seem to get inspired to make a dish that takes two days, is delightful, and will probably never get made again.
Posted by Eric Gordy at 00:54 1 comment: